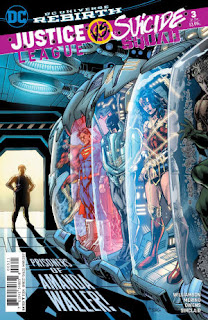 Let's have a look at this past week's DC titles, starting with the weekly event crossover Justice League vs Suicide Squad. Last week the League were defeated and transported to Belle Reve prison, under the control of Amanda Waller. Waller's subsequent proposal is simple: team up with the Suicide Squad to protect her and the critical resource she holds from a fast-approaching team of villains led by the psychic Maxwell Lord.

So the downside to this issue is that the action pretty much entirely grinds to a halt. It is effectively an issue for plot exposition and character moments. The huge storyline running underneath the whole DC Universe at the moment - that someone influenced history and somehow removed 10 years from the world - gets a lot of attention, including a key revelation about Max's villain team that I did not expect.

Jesus Merino's artwork feels a bit flat after the work done in the first two issues, but I suspect that may be more the result of a weaker story than a weaker artist. Hopefully next issue will boast a bit more in the way of fight scenes and adventure. (3/5)

With the USA and Atlantis in a de facto state of war, the US military sends in a special elite squad of mutated amphibious marines to assassinate Arthur before the war goes any further. It does not go smoothly. This has been a strong storyline with a huge scope and some great action and plot beats, and this issue's violence leads to a great cliffhanger. It also has this week's ickiest comic book assassination method: tiny slivers of coral injected in a person's head that react to radio transmissions and rapidly expact. Ew. (4/5)

Given their strong working partnership on The Sheriff of Babylon, it was kind of inevitable that Tom King and Mitch Gerads would collaborate on a Batman storyline. With the extraction of Psycho Pirate from Bane's fortress complete, Selina has one night before Bruce must return her to prison - where she is served a commuted death sentence for murdering more than 200 people. That story thread remains hanging in a frustrating fashion, but for now Batman and Catwoman fight crime together before things get personal at the end of the evening. Remember that really tacky issue of Catwoman everybody complained about back in 2011 (Hint: it was the one with the very porn-like sex scene)? This issue does it much, much better. (4/5)

In a crowded sports arena, Green Arrow has just been framed for murdering a star quarterback, which is a bit awkward. This issue seems to wrap up the whole 'Green Arrow framed as a criminal' storyline with a chase and a bow-and-arrow shoot-out, plus the revelation of which DC Universe villain has been trying to destroy Oliver's life and work. It's solid stuff, but not exceptional. Guest artwork by Carlini, Rodriguez and Vasquez is rather nice, if occasionally uneven. (3/5)

A new issue, a new arc: the Superman of the graphic novel Superman: Red Son arrives near Clark Kent's house, on the run from an alien menace intent on capturing every Superman from every parallel universe. Cue the Multiverse team-up of the year, as a host of old alternative superheroes arrive to help save the day. Long-running story elements get touched upon, but this is basically an excuse to indulge in a whole pile of crossover silliness. It's fun, but at the same time I think the concept could have been better treated with a slower pace and a bit more time. (3/5)
Posted by Grant at 11:46 PM