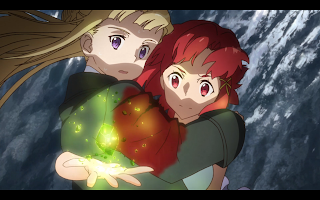 It is 8 October 2016, and time for the second episode of Izetta: The Last Witch.

The witch Izetta has rescued Princess Finé from the Germanian military, but now she must race to find assistance before Finé's injuries overcome her. A series of flashbacks reveal how the witch and the princess first met, and the bond that initially formed between them.

The second episode of Izetta: The Last Witch is a more sedate affair than the first; after a brief but dramatic aerial dogfight the episode settles down to further set up its characters and premise. That is not necessarily a bad thing in the long term, but it does make things feel a little deflated and disappointing.

The opening plane-versus-witch battle is pretty sensational, and showcases some dramatic magical powers by Izetta, for example turning drops of her own blood into ice spears capable of downing a fighter plane. When her powers wane with one plane left it is Finé who saves the day, using Izetta's improvised assault rifle flying 'broom' for the purpose for which it was intended. It's a dynamic sequence and inventively staged; if this is an indication of where the action is going in this series, I am pretty excited to keep watching.

It is also great to see a dramatic series focusing on two female leads. While this is by no means rare in anime, it is still fairly uncommon in broader popular culture and it pleases me whenever I see it. Both characters seems distinctive and well-developed as well. A flashback sequence reveals how the princess and the witch first met each other as children, and begins to fill out the back story of the series in a useful way.

Back in the present narrative, however, there is an awful lot of walking with war survivors through a forest and political machinations back in the Eylstadt capital. The two Germanian agents from episode 1 also return, hot on Finé's trail. While there is decent information for the audience here, I do feel it could have been presented in a more interesting way. The first few minutes are sensational, and the remainder simply never manages to quick catch up. It is nonetheless reasonably enjoyable, giving Izetta: The Last Witch its second good episode in a row. The quality ratio holds at 100 per cent, but it is still early days.
Posted by Grant at 9:54 AM