Star Trek: The Next Generation: "Rascals" 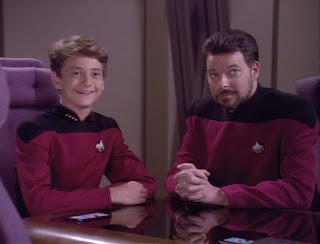 It is 30 October 1992, and time for another episode of Star Trek: The Next Generation.

A transporter accident turns Captain Picard (Patrick Stewart), Ensign Ro (Michelle Forbes), Keiko O'Brien (Rosalind Chao) and Guinan (Whoopi Goldberg) into children, while retaining their adult intelligence and experience. Before a solution can be found the Enterprise is invaded by Ferengi, and repelling the enemy may come down to Picard and his de-aged companions.

If there was an award for the stupidest concept ever thrown at Star Trek: The Next Generation, it would be the idea of transforming several characters into children for an episode. It makes no scientific sense; in fact, it does not even generally wave in the rough direction of science. It is a farcical idea with no basis in reality and pretty much no possibility of ever being treated seriously. Coupled with that is the idea that a small group of Ferengi could take over the Enterprise with two beaten-up Klingon birds of prey and a few firearms. There basically is not a single element of this entire episode that is not one of the most ridiculous things you will ever see.

I am pretty certain everybody who made the episode knew this, because director Adam Nimoy (son of Leonard) and the cast play the whole thing the only way they know how: for laughs. Pretty much the only way a Ferengi invasion of the Enterprise works is if it is in the context of a comedy. We get child Picard throwing fake tantrums to distract guards, and he and Riker masquerading as father and son, not to mention Miles O'Brien (Colm Meaney in his final pre-Deep Space Nine appearance) awkwardly trying to adjust to having an apparent 12 year-old for a wife.

The episode is also partially saved by a surprisingly strong juvenile cast. David Tristan Birkin and Caroline Junko King are solid enough as the youthful Picard and Keiko, but the real stand-outs are Megan Parlen as Ro and Isis Carmen Jones as Guinan. Jones had a small advantage over the others: she had already played a young version of Whoopi Goldberg in the film Sister Act. Jones and Parlen share an unexpectedly insightful series of scenes together, as Guinan pushes Ro - who grew up in a refugee camp - to embrace the second chance at childhood. They are a bunch of scenes that should not work, and yet they work brilliantly.

The main scene between Miles and Keiko O'Brien take a much more serious approach, which strangely works just as well. She wants to be treated normally, but he is incapable of doing anything of the sort. At one point she sits down and leans into him for comfort, and he as good as leaps from the couch in horror.

The end result of "Racals" is an episode that I desperately want to hate, but with which I find myself rather enchanted. It is silly and ridiculous and monumentally stupid, yet it commits to that stupidity one hundred per cent and earns more than a few laugh-out-loud moments as a result. It even manages, against all odds, to occasionally be a little bit dramatic. It's the fourth good episode so far out of seven, giving Season 6 a current quality ratio of 57 per cent.
Posted by Grant at 7:58 AM