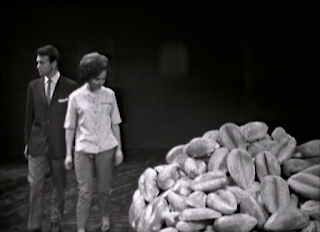 It is 7 November 1964, and time for the second part of the Doctor Who serial "Planet of Giants".

After being shrunk to less than one inch in height, Ian (William Russell) and Barbara (Jacqueline Hill) take shelter inside a discarded briefcase. When that briefcase is picked up and taken inside a nearby building, Ian and Barbara find themselves in a laboratory where a deadly new insecticide has been developed. Barbara touched an affected sample of grain, and is poisoned as a result - but will she tell the others?

The second episode of "Planet of Giants" ups the ante with a more detailed explanation of the dangers of the insecticide DN6, and the revelation that Barbara has been poisoned by contact with it. She does not tell Ian what has happened, which creates a nice bit of suspense. When will she admit her mistake, and when will he notice she is growing sicker as the hours go on?

This seems as good a time as any to pause and heap praise on Barbara Wright, and her portrayal by Jacqueline Hill. Barbara rarely makes a list of favourite Doctor Who companions. Sarah-Jane, as played by the late Elizabeth Sladen, always tops such lists, and she's usually joined by the likes of Rose Tyler, or Leela, or Jamie McCrimmon. I personally think Barbara is a superior character to all of them, and that's partly due to the writing and partly due to Hill's superb performance over the first series and a half of Doctor Who.

Barbara is not a scientific genius - she is a high school history teacher - but she is a smart, capable and independent woman. Unlike the series' subsequent parade of companions in their teens and early 20s, Barbara is already an accomplished and self-assured adult. Hill was 34 years old when Doctor Who commenced, and it seems reasonable to assume Barbara was somewhere around the same age. To the credit of the early script writers, no one seemed to forget that. She is an intelligent woman, and more than capable of handling herself in all manner of high-tension situations. She is more than willing to stand up to the Doctor if she thinks he is wrong, or even defy him entirely as she does in "The Aztecs". She is also modest enough to admit when she is wrong; there's a lovely conversation she shares in "The Reign of Terror" where she tells the Doctor she now realises the futility of trying to change historical events after the Aztec fiasco.

In "Dangerous Journey" she realises pretty much immediately that she has made a terrible mistake in touching grain that has been coated in the DN6 insecticide. She also makes the deliberate choice not to tell Ian. They are trapped on a bench in a laboratory, far away from the Doctor and Susan, and she recognises that reuniting with their friends and getting back to the TARDIS is a much more important and immediate problem. She may be wrong - I personally think she is wrong - but we see her make the choice and it's an understandable and fully believable one. Hill was a great actor as well, and really sold each and every one of Barbara's decisions and choices. I would go so far as claim she's the strongest character of the programme's first three years - and that includes the Doctor himself.

Forrester's weirdly murderous plan to get DN6 approved does not get much more believable here, where he unwillingly draws his chemist Smithers (Reginald Barratt) into his conspiracy. It is such a weirdly unsuccessful storyline, that combines a very high stakes tension with a ridiculously small domestic scale. Forrester seems obsessed with the huge financial stakes of the DN6 project, but it appears to be just he and Smithers in the back room of somebody's house.

Ian and Barbara's adventures more than make up for Forrester and Smithers, however, and that puts this serial - and Series 2 - at two for two. The quality ratio remains at 100 per cent.
Posted by Grant at 5:09 PM