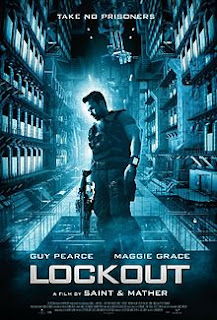 In 2079 the United States government has successfully launched MS One, a massive top security prison built inside an orbiting space station. When the President's daughter Emilie (Maggie Grace) arrives on a humanitarian mission, a catastrophic failure sees the prisoners released and Emilie and her co-workers taken hostage. In a last-ditch attempt to save her life, disgraced CIA agent Snow (Guy Pearce) is dispatched as a one-man army to rescue her before she is killed.

Or, in other words, Escape from New York in Space. That is not simply me claiming there's a similarity: Escape writer/director John Carpenter successfully sued Lockout's writer/producer Luc Besson for plagiarism in a French court. It should be noted that not only does Lockout steal Escape's premise, it does a vastly inferior job of it. This is a ridiculously stupid movie, featuring bad science, a bucket-load of cliches, and a protagonist who communicates not via dialogue so much as random catty lines and witty quips. It is by most sensible standards a fairly terrible film. It is also, if I am to be completely honest, a fairly hilarious one. Sometimes a bad B-movie is just the ticket, and in this case the ticket is pretty entertaining.

The film's ambition definitely exceeds its production budget, particularly in the case of an incoherent early motorcycle chase that visually looks less convincing than a PlayStation 2 racing game. The bulk of the film takes place on MS One, which is a drab collection of featureless corridors and metal floors. The plot does not so much advance as amble: when enough minutes have passed to satisfy most of the audience, an ending is quickly found and employed.

To his credit Guy Pearce just relaxes into the film and has as much fun as he can find. Snow is a weirdly jocular wise-cracking action hero, who genuinely seems to spend more time saying funny things than in rescuing the President's daughter or taking down a horde of rapists and murderers. Thankfully a lot of Pearce's dialogue is pretty funny; it's a fairly strong guide as to how the viewer should approach and treat the film. Maggie Grace is also fairly decent, and despite filling the maiden-in-distress role she does get given a fair amount of agency from time to time. That said, I could probably have done without the repeated threats by various villains and henchmen to sexually assault her - it does get somewhat tiresome, despite the silly and exaggerated nature of the film.

The supporting cast are a lot less effective. Peter Stormare lazily collects a pay cheque as Snow's boss. Vincent Regan plays the same sort of serious authority figure that he's played in most of the sword-and-sandal pictures of the last 15 years. Joseph Gilgun plays the deranged prisoner Hydell on just the wrong side of irritating. As fellow CIA agent Lennie James fulfils a narrative requirement but not much else.

All of that is kind of irrelevant to Lockout's objectives, however. It's an intentionally dumb action flick, designed to have enough explosions, punch-ups and jokes to entertain an undiscriminating audience for 90 minutes. It does achieve that relatively low goal, and if you are seeking that kind of sub-B grade science fiction romp then it's a fair enough option. It really is quite stupid, though.
Posted by Grant at 5:02 PM