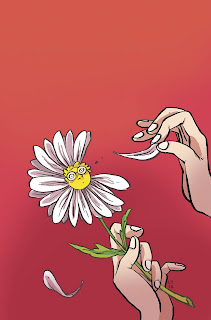 Let's talk about Giant Days. I read it every month, and more often that not give it a quick review along the lines of 'so great, really funny, nice characters' and so on. Now that it's hit an impressive 23 issues (including a one-shot holiday special) it is worth pausing to appreciate just how likeable and enjoyable a book it is.

The book focuses on three women, now aged 19, who have been studying together at university. That experience has brought along with it storylines about romance, break-ups, coming out as gay, being a goth, finding student accommodation, student politics, music festivals, and pretty much anything else immediately recognisable to any former or current university student in the developed world. The humour is great, and very closely tied to the characters. Those characters are broadly developed but equally likeable.

This issue focuses on Daisy's first steps in a lesbian relationship with the aggressive and intense German exchange student Ingrid. It is funny and also rather sweet, as the insular and nervous Daisy is forced well out of her comfort zone for the first time. Subplots keeps spinning for her housemates: Esther, for example, is stuck in a horrible job in a bakery while desperately graving a job at the science fiction bookstore down the road.

One of the best assets of Giant Days is that it is enormously consistent. It might not be the very best book published in any given week, but it is never less than excellent. It's warm, funny and just one of those wonderful comic books you look forward to reading each and every month. (4/5)

Under the cut: reviews of The Autumnlands, Saga and The Wicked + the Divine.

The Autumnlands' second story arc reaches its literally explosive climax as Leoroyd makes a stand against a god. There have been quite a few delays over the course of this run, and that's led to a sort of stop-start momentum to the story. Thankfully collected edition readers won't have that problem. It's a great climax overall, throwing up a pile of new questions and freeing the book up to set off in a fresh direction. Benjamin Dewey's artwork remains unlike anything else I'm seeing on the shelves. It gives the book a remarkably literary quality. (4/5)

It is the penultimate issue of a story arc, which means in true Saga style the shit has utterly hit the fan. Our heroes are trapped on the comet Phang about to be completely destroyed in a 'time suck', with no fuel to make a take-off and escape, and with enemies both without and within. It's not a perfect issue - there's something about this latest arc that's felt a little loose and unfocused - but it's still packed with great dramatic moments and satisfying characters, and in the context of the series overall the final page packs one hell of an emotional wallop. A slightly perplexing comment from Brian K. Vaughn at the end of the book suggests next issue will be the last Saga for a while, for reasons that he says will become clear in that issue. I have no real idea what that means - could it really be wrapping up in one issue's time? (3/5)

When Ananke was sneaking around secretly murdering members of the Pantheon in order to prevent 'the great darkness', I honestly assumed it was a turn of phrase. Issue #25 certainly proved me wrong, and before we even get that far there is a slightly worrisome confrontation between Laura and Woden that raises the question of just how stable Laura really is now that she has ascended to godhood and inherited her powers. Great art as always, a growing sense of menace and momentum, and a kicker finale. This is a great issue. (5/5)
Posted by Grant at 7:49 AM