Izetta: The Last Witch: "The Secret of the Witch" 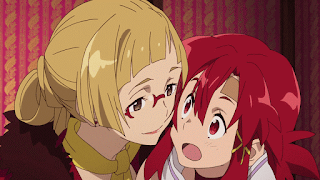 It is 22 October 2016, and time for the fourth episode of Izetta: The Last Witch.

Princess Finé returns to Landsbruck upon the death of her father. While preparations begin for her coronation, Finé meets with her military council to determine the next course of action. All are keen for Izetta to continue fighting for Eylstadt, however it is clear that her magical powers are not always available to her.

After the action-packed war scenes of episode 3, Izetta: The Last Witch takes events down a level for an episode of plot development, character backstory and the laying-down of rules for Izetta's magic. That's an important thing: magic may be fantasy, but to work effectively in a narrative it needs to have rules. There needs to be parameters set for the viewer, so that they can understand what Izetta's limits are, and what she can and cannot do. If this episode simply contained the above, it would easily get another thumbs-up from me. Unfortunately events are derailed by the bane of anime: fan service.

Jump back 25 years and fan service - sexually titillating shots of female characters' breasts, buttocks and underwear - was irritating and unpleasant, but it was understandable why it was there. The core audience for non-children's anime was okatu, generally male, generally teenagers, generally obsessed like most male teenagers with sexualised imagery of women. To succeed commercially I suppose there was a level of pandering to that market. Jump forward that quarter-century and anime is an international pop culture phenomenon, with widespread audience across the world and a lot more female fans and older viewers. Fan service was always tedious, but in a modern-day context it feels both woefully out of date and actively unpleasant. I honestly do not think the bulk of the anime market enjoys seeing it, but we all put up with it to one level or another because we like the rest of the shows. To the industry's credit I also think fan service is on the decline, which of course makes seeing it rear its unwanted head these days even more egregious and offensive than it used to be.

This episode gets derailed once Finé hires a noted marketing expert to re-package and present Izetta to the people of Eylstadt as the fabled 'witch which' of local folklore. It turns out this marketing expert, a woman, is a lecherous pervert obsessed with groping the breasts of any young women around her - including both Finé and Izetta. It's an ugly scene, presenting fan service at its absolute worst, and throws the rest of the episode into disarray as a result. The rest honestly is great stuff, but I find myself not caring or paying attention because I am too distracted and annoyed at all of the faux lesbian titillation.

It's a particular shame because this is otherwise shaping up to be a great series with strong characters, a nice alternative European setting, and brilliantly staged action. The orchestral score is beautiful - I'd buy the CD if it ever crossed my path - and the voice acting is solid. Then there's this soft-core animated pornography, dropped onto the rest of the series like a bucket of turds through a ceiling fan. It's a crying shame.

Four episodes in, and three have been good. This one, most definitely, was not. The quality ratio drops to 75 per cent.
Posted by Grant at 8:08 AM