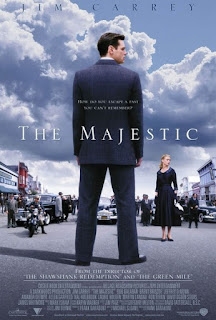 Screenwriter Peter Appleton (Jim Carrey) is a up-and-coming Hollywood screenwriter in 1951. His first film is in cinemas and his second is on the cusp of going into production. When he is named in an anti-communist Congressional investigation, he is immediately disgraced and blacklisted. Drunkenly driving into a storm on night he crashes his car and wakes up on a beach with near-total amnesia. In the small town of Lawson he is immediately adopted by cinema owner Harry Trimble (Martin Landau) - who mistakenly believes Peter to be his son Luke, last seen missing in action during World War II.

The Majestic is director Frank Darabont's heartfelt ode to old-time Hollywood cinema. Channeling his best Frank Capra, he presents an uplifting and deliberately sentimental slice of Americana: the patriotism of World War II, the paranoia of the Red Scares, and the unifying, healing power of Hollywood movies to cure all ills and bring all people together. I suspect how one responds to the film depends on their threshold for that sentimentality. If you like to wallow in these kinds of cloyingly sweet romantic and family-based dramas, then The Majestic is a pretty entertaining movie. If the merest hint of sweetness turns your nose up, then this movie is going to stink like a garbage heap. As for me, I think my feelings are somewhere in the middle: The Majestic has a lot of good material in it, but it's a hell of a mess.

One of the key early problems is structural: in order to tell the convoluted story of a screenwriter accused of communist beliefs who loses his memory but washes up safely in the exact town where he has a long-missing doppelganger, screenwriter Michael Sloane has elected to tell his story chronologically. A more skillful writer might have commenced the film with an amnesiac man waking on a beach, and filtering in his backstory and true identity via flashbacks as his memory slowly returns. Instead Sloane forces the audience to sit through a lengthy opening sequence establishing Peter, his job, his life and his career, and then 15 minutes into the film forces the audience to sit through an entire second introductory sequence to re-establish him in Lawson. By the time the film feels as if it is actually going somewhere, about half an hour has already passed. It's an issue that dovetails into the film's second big problem: its length. There is a relatively modest storyline to the film, yet it runs for more than 150 minutes. A more concise and clever way of telling the story would have saved the viewer a lot of time.

There is also the big problem that the story simply doesn't seem believable. Coincidences occur in most films, but they work if the viewer never notices how unbelievable they are. The Majestic dwells so carefully over the entire town believing Peter is Luke Trimble - including a father and a girlfriend - that it is impossible not to take pause and realise just how unlikely it all is. That, more than anything else, severely dents the film's chances.

Thankfully it is beautifully shot, with a really pleasant early 1950s feel and gorgeous sets and costumes, so at the very least it's an immersive experience. It is also very well acted. Jim Carrey is a strong dramatic performer, but he never seems to get the commercial success that comes from his comedic roles. That's a real shame, because here he does some of his very best work. Martin Landau is predictably wonderful as Harry, and Darabont fills the rest of the cast with a bunch of fine supporting players including Jeffrey DeMunn, Hal Holbrook, Bob Balaban, Laurie Holden and James Whitmore. The script may has issues, but it looks and feels wonderful.

One really nice touch is Sand Pirates of the Sahara, the B-movie adventure for which Peter wrote the screenplay. It plays a key role in the plot, and we actually get to see one or two key scenes from the film - produced with the actors Bruce Campbell, Amanda Detmer and Cliff Curtis. If nothing else it demonstrates just how much Campbell is an actor born a few decades too late: he would have killed it in the 1940s and 1950s. Other cameos include an amusing set of unseen studio executives, voiced by the likes of Carl and Rob Reiner and Sydney Pollack, and Matt Damon as the actual Luke Trimble.

It is too slow, too sincere and sentimental, and its story definitely stretches credulity, but there's a wholesome, quite pleasant heart to The Majestic. It is infused with an overwhelming amount of nostalgia, but it does turn out to be quite a nice story to visit with just enough standout scenes and moments to feel worthwhile.
Posted by Grant at 8:56 AM