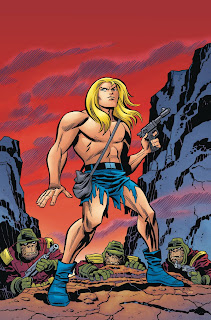 Jack Kirby would have turned 100 years old this year. The comic book industry legend created a raft of characters and series for both Marvel and DC Comics. At Marvel he co-created some of the publisher's most enduring and iconic characters, including the Incredible Hulk, the Fantastic Four, Thor and Iron Man. When he moved to DC Comics in 1971 he created a range of hugely inventive series that, while never as popular as his Marvel creations, helped to shape the fictional DC Universe into the form it takes to this day. His New Gods, notably the hugely powerful villain Darkseid, retain a dedicated cult audience to this day. A slightly more obscure creation, but again one with a keen cult following, was Kamandi: The Last Boy on Earth, in which a blond teenage boy must navigate a post-apocalyptic world where humans have reverted to savagery and anthropomorphic animals now rule the Earth.

Kamandi seems particularly popular with comic book creators, and every time DC has relaunched or revived itself in recent years, a queue of writers and artists have formed - each with the hope of relaunching Kamandi and giving it their own personal angle. DC's publisher Dan Didio has resisted every time until now, where he's giving half of them the opportunity all at once.

Kamandi Challenge is a serialised re-imagining of Kamandi's story, with a different writer/artist team tackling each chapter. There is no over-arching storyline to this series: one team builds their issue to a cliffhanger, and it is up to the next team to resolve it. I am curious to see how this experiment goes, because while it could build to a very surprising and unexpected story it could also easily turn into some indulgent masturbatory exercise for the creatives involved. They are sure to have fun with this structure, but will their readers?

Based on this first issue, the jury is still out. The opening chapter, written by Dad Didio with art by Keith Giffen, is rough as all hell and not a particularly enjoyable read. I did enjoy Didio and Giffen's earlier Kirby-inspired series OMAC, but the creativity seen there does not follow them here. The second chapter by Dad Abnett and Dale Eaglesham is much stronger, with better panel layouts, a greater sense of wonder and excitement, and much, much stronger dialogue. As for where the book goes from here, it is hard to say. I applaud any publisher that tries something new with its comics, but in this specific case - and with such pent-up demand by die-hard Kamandi fans - I suspect a normal single-creative team monthly book may have been a better choice. (3/5)

Grant Morrison turned Doom Patrol on its head way back when, transforming it from a second-rate superhero team book to a marvellous act of comic book surrealism. Gerard Way, a vocally keen fan of Morrison, is pretty much recreating that book one character at a time, in what has felt less like a reboot and more like a fan reproduction. Thankfully while it's a derivative book it is doing things in a fairly inventive and entertaining. There are new characters weaved in with the old, a wonderfully silly cadre of villains to defeat, and some odd segues riddled through the series. It's non-essential reading, but a fun tribute. (3/5)

Hulk is shaping up to be a remarkable story about grief and rage. It focuses on Jennifer Walters, formerly She-Hulk but now in human form following the events of Civil War II. Her cousin Bruce Banner was murdered as part of that miniseries, and as she struggles to resolve the trauma of his death she simultaneously has to work to prevent herself from transforming into a violent, rage-filled green monster. The book boasts a close focus on its protagonist, with Tamaki providing a strong inner monologue for Jennifer throughout. At the same time a dark, unearthly situation is building around her first new case as a lawyer, which is going to force her back into the superhero game whether she wants back in or not. This is one of the strongest debuts for a Marvel series I've read in some time: it's well worth jumping in now. (5/5)

It's the final issue of another Saga story arc, which usually means high drama and emotions running up through the roof. This climax to arc #7 is certainly no exception, with the comet Phang about to plunge into a devastating time suck and its entire population guaranteed to die along with it. The regular cast already lost one life during the course of their time on Phang, and there's a heavy sense of dread that hangs over this whole issue as they race to escape. The tension in this issue is nigh-on apocalyptic. Excellent writing and art, a driving momentum, and the best ending for a single comic book issue I've seen in a very long time. (5/5)
Posted by Grant at 5:01 PM