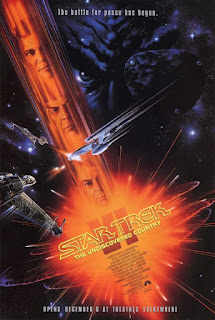 An environmental catastrophe sends the Klingon Empire spinning towards total collapse. Taking advantage of the crisis, the Klingon Chancellor Gorkon (David Warner) arranges with Starfleet's Captain Spock (Leonard Nimoy) to begin immediate peace negotiations with the United Federation of Planets. Captain Kirk (William Shatner) is sent to escort the Chancellor to Earth onboard the USS Enterprise, but when Gorkon is assassinated and the Enterprise's crew implicated, Kirk and McCoy (DeForest Kelley) are sentenced to a Klingon prison while Spock plays detective in the attempt to find the real culprits.

A lot Star Trek fans debate which series was best: the original series, The Next Generation, Deep Space Nine, Voyager or Enterprise? The smug side-answer is actually none of those. I think there's a strong argument to be made that the best Star Trek ever got was the four-film extended narrative formed by The Wrath of Khan, The Search for Spock, The Voyage Home and The Undiscovered Country. They combine humour with drama, action with intrigue, and they actually seem to mean something to their characters. They may initially seem to be about space battles, rescuing whales and assassinating Klingons, but really they're ultimately about what it means to grow old.

Star Trek V: The Final Frontier is a bit of an outlier in that respect. It does spoil the flow a tad, regardless of its individual merit, because it does not flow smoothly on from its predecessors like the others do. It also specifically rails against the themes that unite the other four: it presents a James Kirk who actively denies and resists age rather than coming to understand and embrace it. Released two years later, The Undiscovered Country wisely ignores it and instead takes its cues from the other three. It also does something Star Trek has always excelled at: taking real-life social concerns and replaying them back at its audience, hidden underneath a veneer of science fiction hokum.

The Klingons and the Federation always did feel a little like the USA and Russia during the Cold War, and so it is fitting that the events of this film match the collapse of the Soviet Union and the opening-up of a new, more optimistic period of history. In terms of Star Trek history it also marks the end of an era: the Klingons were always seen as the ultimate adversary to Captain Kirk, and now that adversarial relationship is coming to a close.

It is in that regard that film gives William Shatner some of the best material he has ever had. James Kirk hates the Klingons to the point of actively racist hostility, ever since Captain Kruge had his son murdered on the Genesis planet. 'I have never forgiven them for the death of my boy,' he admits in a key log entry. It is a key to unlock tremendous drama, because it puts a man who despises the Klingons into spearheading an era of peace with them. The film also provides strong material for Leonard Nimoy as Spock, who arrogantly presumes too much of both his best friend, and his Vulcan protege Valeris (Kim Catrall). The remainder of the regular Star Trek cast all get solid moments to shine, particularly Sulu (George Takei) - now captain of the USS Excelsior. The young lieutenant is now a middle-aged man with a command of his own: another sign that time is catching up with Captain Kirk.

Over on the Klingon side David Warner is dignified as Chancellor Gorkon, but it is Christopher Plummer who damn-near steals the entire film as General Chang. He cuts a striking figure with his shaved head and screwed-in metal eye patch, and he presents a memorable character with his playful taunts and penchant for quoting Shakespeare. There have been a couple of great villains across Star Trek's five decades. While most fans will point to Ricardo Montalban's Khan as the all-time best, for me Chang just pips him to the post. I still cannot fathom how the production team managed to attract an actor of Plummer's calibre to take on the role. He is simply magnificent.

Despite the assassinations, the peace negotiations and the prison break-out, The Undiscovered Country is about being old, and more specifically about what it means to be old in a changing world. Towards the climax Spock openly questions the possibility that he and Kirk have simply become too old and inflexible to cope with the new shape of the galaxy. In an earlier scene Gorkon notes it will be the people of his and Kirk's generation who will find peace between the Federation and the Empire to be the most difficult. The Wrath of Khan presented a man fearing old age and learning to embrace life. The Search for Spock was literally about death and rebirth. The Voyage Home was literally about coming home. The key lesson Kirk learns in this film is that you cannot hold onto your past: you must always embrace an ever-changing future to survive. When seen altogether they tell a remarkable story about age, change and death; one of the best story arcs the franchise ever had.

Nicholas Meyer returns to direct this sixth and final film outing of the original series cast. He brings with him an excellent sense of pace and tension. The action scenes are brilliantly staged, particularly the climactic stand-off between the Enterprise and Excelsior, and a Klingon bird of prey that can fire while invisible. The humour is rich and regular, and unlike the slapstick of The Final Frontier does not resort to demeaning its much-loved characters to score a gag. When the film reaches it conclusion, with the day saved and the Enterprise ordered to return home for decommissioning, we get perhaps the most perfect ending ever. The Enterprise literally flies off into a sunset, and one by one we see each of the regular cast's signatures write across the screen. They're signing off and saying goodbye. Some of them would make subsequent appearances in Star Trek films and television episodes, but as a united crew this was their last hurrah - and it was essentially perfect. I tear up a little every time.
Posted by Grant at 6:00 PM