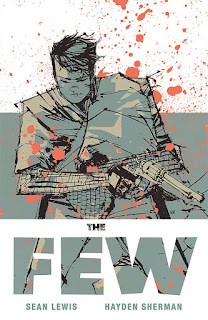 In a post-apocalyptic USA, two brothers find an unconscious woman beneath a tree, cradling a baby in a gas mask. Certainly it's one of the more arresting opening premises for a comic series, and it helps kick The Few off in fine style.

This extra-length opening issue tells a reasonably engaging story, but it is Hayden Sherman's artwork that really makes it jump off the page. Using a similar visual style to the likes of Sean Phillips, Sherman's jagged, edgy images give the whole story a sense of danger and tension. He has a strong sense for white space as well, using fairly limited art in many of the panels to emphasise the action and drama. The limited colour palette works towards that goal as well.

Like a lot of first issues, this gives a solid set-up without really indicating where the story is going to go in future months. For now it seems well worth keeping an eye on: if the story kicks in well in February this might really be something. The art quality is already here - it's just Sean Lewis' story and script that need to bring the goods. (3/5)

Under the cut: reviews of Black Widow, Divinity III: Aric Son of the Revolution, Revolutionaries and Star Trek: Waypoints.

I must have missed a crossover or event somewhere, because former SHIELD director Nick Fury now appears to be a mysterious super-human in a cloak cosplaying as Destiny from Neil Gaiman's Sandman. As the bulk of this issue focuses on Natasha being brought by Bucky to meet with him, that sort of weird inexplicable state of affairs made this a fairly unengaging read. It also does not immediately appear to add anything to the ongoing story arc; while it may and likely will become clear in the future, for now it just makes things feel like a waste of the reader's time. A brief epilogue also takes out one of the storyline's villains in a highly abrupt manner. Everyone involved in this book have demonstrated an ability to much, much better than this. I still cannot quite understand how Black Widow has turned out to be such an odd misfire. (2/5)

Another tie-in to Valiant's Divinity III miniseries, in which history has been changed so that Stalin's Soviet Union took over the entire world. In this reality, XO Manowar fights for Russia against growing attacks from 'Deadside', a magical alternate reality from which hordes of the undead may strike against their Russian oppressors. Cafu's art is strong, but it is Andrew Dalhouse's colours that really make each page pop. It is a simple one-shot, fleshing out the so-called 'Stalinverse', but it's a neat and effective one. (3/5)

Following IDW's stitching-together of their various Hasbro-based titles into one big continuity, Revolutionaries essentially teams them all together. In this case it's a pair of Transformers, Action Man, a GI Joe agent, and ROM the Spaceknight working together as a Justice League-style super-team. It's all a bit ordinary, to be honest; I keep sampling IDW's Hasbro titles and apart from some of their Transformers work it has all been rather underwhelming. Fico Ossio's artwork here is too exaggerated and busy to be particularly readable. The panel layouts feel awkward, as if a little too much effort was placed into laying them out in non-typical ways. I have to be honest: I was not at all engaged by this book. (1/5)

IDW's Star Trek anthology title continues with two stories - one from Voyager and the other from Deep Space Nine. "The Wildman Maneuver" is an in-universe comic book drawn by the orphaned Naomi Wildman onboard Voyager. It has a certain amusing charm, and might work as a back-up, but as the lead story and as a return to comics for Voyager it is fairly disappointing. In "Mother's Walk", Major Kira attempts to undertake a Bajoran ritual taken away from her during the Cardassian occupation. It feels like a solid fit to the Bajoran religion from the TV series, but the story here is a bit too twee and sentimental to really work. It's a pity: I do like both series, but neither strip here really feels like it is doing them justice. (2/5)
Posted by Grant at 5:00 PM