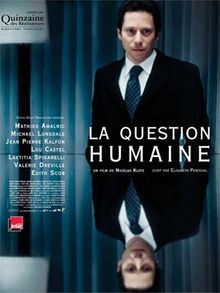 Simon Kessler (Mathieu Almaric) is a workplace psychologist working in Paris for a German corporation. One day he is approached by the company's vice-president with a problem: the CEO, Mathias Jüst (Michael Lonsdale), has been behaving erratically. He sits in his company car listening to music instead of coming into the office. He goes off in strange trails of thought. He has been caught quietly sobbing at his desk. When Kessler begins to investigate Jüst, he also winds up discovering more than he expected about the company for which he works - and its appalling past.

Heartbeat Detector is a 2007 French drama with an extraordinary sense of menace and atmosphere but also a central accusation with which it is almost impossible to fully engage. At the least, however, it is a powerful and provocative work with strong performances and a nicely ambivalent screenplay. The central performance by Mathieu Almaric alone is worth the price of admission. On the other hand if you are easily triggered by imagery from or discussion of the Holocaust, it's best turning away now.

Kessler's investigation I can leave for the film to reveal by itself, but the ultimate question at the end of the film needs discussing. Director Nicolas Klotz and screenwriters François Emmanuel and Elisabeth Perceval take the language of Nazi extermination, using actual reports written in the early 1940s, and draw a direct parallel with the language of corporate management. The clinical avoidance of plain language lines up between the two of them. Everything is written in a sanitised, safe code language. No one is murdered or laid off, there are simply 'downsizings' and 'final solutions'. Joining the concepts of nazism and neoliberal capitalism is provocative, but also arguably rather offensive. It all feels a step too far.

Kessler's growing concern and paranoia, however, is excellently presented. A string of discoveries gradually get under his skin, and does the problem of divided loyalties. He has been ordered to investigate Jüst, but there is already a firm implication that he is only needed to justify pushing Jüst out of the way in a bit of underhanded corporate politics. Jüst seems to making some kind of sense, but it is also blindingly obvious that he is deeply emotionally unwell. The film uses a slow, measured pace that arcs up the disturbing nature of Kessler's discoveries.

Almaric is a brilliant actor: to my mind one of the best working in France today. He plays a complicated character here, and one that is really put through an emotional wringer. As his work continues he starts getting anonymous letters in the mail, each envelope containing documents relating to Nazi extermination processes. One particularly harrowing sequence simply consists of Kessler reading one of the reports out aloud. The words alone are terrifying to the point of being actively nauseating. This film, which from the outside seems like some kind of corporate thriller, tackles some very, very bleak territory.

In a weird segue in the middle of the film, Kessler attends a Portuguese musical performance with his girlfriend. I am reasonably certain the music is 'fado', a genre concerned primarily with themes of mourning and loss. Wedged in the middle of such dark material it becomes particularly potent and effective.

Michael Lonsdale is dignified and mournful as the stricken Jüst. It is a performance almost better suited to the theatre than to the cinema, but it is rivetting to watch. By an amusing coincidence both actors have played James Bond villains - Lonsdale in Moonraker and Almaric in Quantum of Solace (filmed immediately after he completed his work here). It's not quite the trifecta of Lonsdale, Jonathan Pryce (Tomorrow Never Dies) and Sean Bean (GoldenEye) in Ronin, but it's close.

I think Heartbeat Detector overreaches with its ultimate accusations, but Klotz definitely makes the most of the journey there. This is a dark, powerful and gently challenging work with some beautiful photography (courtesy of cinematographer Josée Deshaies) and outstanding performances. The French title, La Question Humaine, is perhaps the better one. The rather odd English title only makes sense once you see the film.
Posted by Grant at 4:51 PM