Doctor Who: "The Daleks" 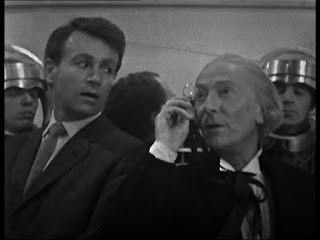 It is 28 November 1964, and time for the second instalment of "The Dalek Invasion of Earth".

The Doctor (William Hartnell) and Ian (William Russell) are prisoners of the Daleks, who have successfully invaded the Earth of AD 2164. Meanwhile Barbara (Jacqueline Hill) and Susan (Carole Ann Ford) have been rescued by London's human resistance, who are planning a bombing attack on the Dalek saucer.

Doctor Who's first epic event serial continues in this solid second episode. It is not quite as attention-grabbing as the first part, but a combination of drama, action and menace help to ensure this serial remains one of the best of the series so far. The presentation of the Daleks feels much more confident than in their debut run, and the devastated future London brings along with it a provocative parallel with the real-life London during the Blitz.

It is a provocative step just 18 years after the end of World War II to present a London shattered by war. For much of the adult viewers of this serial the Blitz would have been a real memory, and correspondingly the parallels between the Daleks and the Nazis would have seemed immediately clear. Writer Terry Nation would later claim he had envisaged the Daleks as Nazi analogues from the very beginning, but I strongly suspect he misremembered: their Nazi parallels clearly kick off here.

The robo-men are a particularly important step in Doctor Who. They appeared in the previous episode, but get explained a lot more here: human prisoners that have been attached to cybernetic controls in order to make them slaves of the Daleks. It is said to be an irreversible process and only ends when the victim eventually goes insane and commits suicide - we see one such suicide in the first scene of the last episode.

As the decades roll on, one of the most perennial tropes of the series will become the transformation of human beings into monsters, whether it is an alien infection as in "The Seeds of Doom", or venomous spiders in "Full Circle", or cyber-conversion in too many Cybermen serials to name. It plays on a particular fear: you are not going to attacked by a monster, but rather turned into one yourself. The robo-men are, in effect, the very first example of this trope. When captured by the Daleks, you do not simply die - you are transformed, made to hunt down and kill your friends, and then you die.

A remarkably large number of extras appear in this episode, both as resistance members huddled down inside their hideout and as rounded-up victims sent to the Dalek saucer to be converted in robo-men. It gives this serial an unprecedented scale for Doctor Who up to this stage. Trying to present a war-torn and defeated future London on the production budget of Doctor Who seems like it should be insanity, yet it seems additional resources were afforded to this serial to give it the biggest impact possible.

It's great to see the regular characters navigate this terrifying future as well. For Barbara (Jacqueline Hill) it means joining a violent raid on a Dalek saucer, because rescuing the Doctor (William Hartnell) and Ian (William Russell) from harm matters more than keeping herself safe. For the Doctor and Ian themselves it means undertaking an elaborate scheme to unlock their cell door onboard the saucer - only to discover it was actually an intelligence test set for them by the Daleks. The episode ends with a captive Doctor being prepared for robo-man conversion.

We're five episodes into Series 2 and every episode to date has been good. The quality ratio stands at 100 per cent.
Posted by Grant at 11:21 AM