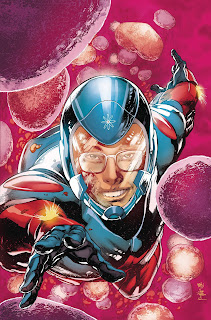 I would not be able to really tell you why, specifically, but I have always been a big fan of the Atom, aka scientist Ray Palmer. I think part of it is that the character is a scientist first and superhero second, and his adventures most often edge more towards science fiction than crime fighting. Despite the appeal that the character holds for me, he has never really been more than a second-stringer. One-shots and specials aside, he has not even anchored his own solo series since 1989. A replacement version of the Atom - because let's face it, almost every DC character got one in the 1990s and 2000s - named Ryan Choi got a monthly series in 2006 that lasted 25 issues. Since then it's simply been guest appearances and team books for either version of the character.

Both of them get a re-introduction in Justice League of America: The Atom Rebirth #1, the first of four one-shots coming out this month in the lead-up to a relaunched Justice League of America. The relaunch's writer, Steve Orlando, is writing each one-shot with a different artist on each book. The Atom Rebirth gets Andy McDonald, who infuses the book with clean, slightly exaggerated look and bold inks. It's a look I really like, so if Ray and Ryan make an impact in the Justice League I have hopes McDonald might be tempted to do art on an Atom ongoing series full-time.

The plot is essentially all prologue and set-up, introducing both characters, having them meet as university lecturer and freshman student, and into them working together as the Atom - Ray in the suit and Ryan running support. It also dovetails perfectly into scenes of Ray Palmer going missing back in DC Universe Rebirth #1: another thread from that book appears to be slowly pulling together.

If you have waiting for the Atom to return, then this - and Justice League of America - is your chance. I wasn't planning on picking up the League book, but based on this I am sorely tempted. I might pop back over the next few weeks and see how the other three one-shots go. (4/5)

Under the cut: reviews of A&A: The Adventures of Archer and Armstrong, Faith, Ragnarok, and Star Trek: Boldly Go.

A&A: The Adventures of Archer and Armstrong #11

I haven't had a look at Archer and Armstrong for a while, which is entirely my fault. It's always been a great comedic set-up, matching a credulous young straight man with a drunken and shambolic six thousand year-old immortal. This sees Archer and the weird idiot clone of Armstrong called Gub-Gub in the middle of a standard comic book body-swap, with typically funny results. Mike Norton's artwork is great: he is using a looser style here than his work on Revival, and that helps to accentuate the comedy. This issue has a very busy plot, which comes with the territory of part 11 of a 12 issue comic, but the pace is frantic and the jokes and broadly speaking pretty funny. Anyone after a comedic superhero book should probably check this one out. (3/5)

I have really enjoyed Faith, which is probably Valiant's most traditional superhero book. Jody Hauser's scripts have had a nice easygoing vibe to them, and Faith herself is an upbeat, body-positive character with an appealing sort of pop culture obsession. This issue didn't quite work for me, as Faith begins to hallucinate all manner of ghosts and undead creatures without explanation - including the ghosts of people she knows that have died. The real problem here though is Joe Eisma's artwork. It's rough and sketchy, and looks an awful lot like colourist Andrew Dalhouse has simply worked from loose pencils. Whatever the process, it is not a good look and really gets in the way of the story. (2/5)

Ragnarok is a slow series, managing just one issue every three months or so, but it's a pretty fun one. This series is basically an excuse for legendary writer/artist Walter Simonson to write about a draw Norse mythology - and that's a pretty great selling point for any comic book. With Thor on his last legs, his elf companion Regn chooses to enter the Black Hold of Angantyr alone. This is wonderful high fantasy, told with a wonderful turn of phrase and with stunning character designs and illustrations. Laura Martin has a beautifully sense of colour too, using a limited palette to make the characters pop right out from the backgrounds. Simonson's progress on Ragnarok is a little slow, but each issue I've read has been worth the wait. (4/5)

This Star Trek Beyond sequel is becoming something on an unholy mess, quite frankly, with Spock assimilated by the Borg and Kirk commanding the USS Endeavour to rescue him from Romulan space. There's enough in that sentence alone to make any sensible Star Trek fan cringe, and it's a shame because this series started off with such promise. Tony Shasteen's artwork captures the various likenesses as well as he usually does, but the script simply borders of fan pornography. (2/5)
Posted by Grant at 9:43 PM