Yowamushi Pedal: "Because I Can Go to Akiba for Free" 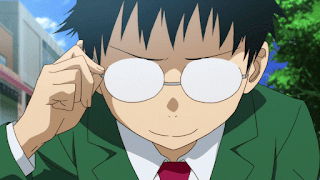 It is 7 October 2013, and time for the first episode of Yowamushi Pedal.

Onoda Sakamichi has his first day at Chiba Sohoku Public High School, where he plans on joining the school's anime club. Upon arrival he is dismayed to discover that the club has been closed down with no groups available other than athletic ones. Another new student, Imaizume Shusuke, is a hyper-competitive cyclist who plans to join and dominate the school's cycling club - only to discover that Sakamichi, who rides his bike 45km a day to visit Akihabara and buy anime merchandise, is secretly an enormously talanted rider himself.

Yowamushi Pedal is an amiable comedy-drama anime based around a high school cycling club, and based on the popular manga by Wataru Watanabe. It is a sports anime as well, a genre that has been rolling along to great success for decades now. I have never really watched that much sports anime. I did enjoy Tsuritama, a 12-part anime about bass fishing, but it also featured mind control and aliens. Yowamushi Pedal is just about the cycling, and its first season alone is much, much longer.

This is a great first episode. It introduces a bunch of characters in just 25 minutes, and while I suspect remembering all of their names will take a few more episodes, their personalities are all clear and well-developed. It also does a remarkable job of avoiding many of the pitfalls of the typical high school anime. No one appears to be a lecherous pervert. Thus far there hasn't been any egregious 'fan service'. Thus far the characters all seem like pleasant people that are not going to be a chore to watch.

Sakamichi is a great protagonist. He's short and a little scrawny-looking, with a pair of glasses that regularly transform his eyes into two huge white circles. He is not particularly interested in bicycle-riding, except for the fact that if he races from school to Akihabara in the late afternoon he can spend the money he would otherwise pay in train fares on a few more capsule toys. It makes him a wonderful lead for an anime about a high school competitive cycling club, because he is coming to that group without any real knowledge or interest in cycling. It makes him a great point of view for the audience, who likely don't know a lot about bicycle racing either. Sakamichi's anime obsession is also quite gently played, making him sweetly under-confident rather than gratingly nerd-like.

Shusuke is a sharp contrast. He is obsessed with his sport, and burns with a rage for the cyclist who recently beat him in a race. He trains constantly, and is stunned when he notices the ease with which Sakamichi cycles up hills. Seeing how these two very different characters interact over the coming episodes should prove interesting.

There is a lot of comedy here, and it plays out really well. The animation, which appears to be partly made in Vietnam going by the credits, is sharp, colourful and dynamic. I cannot guarantee I will be watching and reviewing all of Yowamushi Pedal, but for a first episode this is really entertaining stuff.
Posted by Grant at 5:03 PM