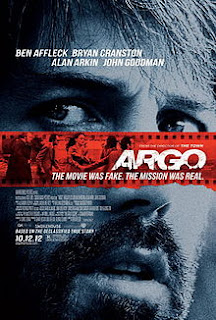 In November 1979 Iranian protesters storm the United States embassy in Tehran, seizing 60 hostages and demanding that the USA return the exiled Shah to Iran for trial and execution. During the chaos six embassy workers escape, taking refuge inside the nearby residence of the Canadian ambassador. CIA exfiltration specialist Tony Mendez (Ben Affleck) is tasked with the near-impossible task of rescuing the six escapees before they are discovered and taken by the Iranian government.

Almost a decade ago I read a sensational article in Wired about a ridiculous CIA plot to rescue six embassy staff from Iran using a fake motion picture as a cover story. It was one of those 'too ridiculous to be made up' stories, involving an actual screenplay to a science fiction B-movie, Hollywood producers, design drawings and concept art by legendary comic book artist Jack Kirby, and a tense evacuation via Tehran's international airport before the Iranian police discovered the identities of the six runaway diplomats. I remember thinking at the time it could make for a pretty sensational motion picture, and five years later actor/director Ben Affleck proved me right. Argo is a tightly written and smart espionage thriller, boasting a great script, strong direction and a great cast.

Affleck seems pretty firmly set now as the heir apparent to Clint Eastwood, another Hollywood leading man who shifted to directing and proved himself to be a hugely talented filmmaker. Both men direct films with intelligence and a subtlety of visual style, as well as a measured storytelling pace that favours good actors over cheap thrills. I was a big fan of Affleck's earlier thriller The Town. Argo is the stronger film, however, showing off a maturity of talent and a strong eye for detail. Ben Affleck already has another film out in American cinemas right now, Live by Night, and is working on developing The Batman. I am very keen to see both.

While Affleck does deliver a strong performance as CIA specialist Tony Mendez, the most entertaining roles go to other actors. Bryan Cranston is excellent as Mendez's boss, CIA boss Jack O'Donnell, and as two participating Hollywood producers John Goodman and Alan Arkin give the film a valuable injection of humour. Smaller supporting roles go to a host of talented performers, including Victor Garber, Tate Donovan, Clea Duvall and Zeljko Ivanek.

While some liberties are taken with the actual historical events, Chris Terrio's screenplay keeps the narrative clean and readily understandable. A relatively large cast of characters is juggled well, and the story never gets bogged down in the minutiae of the Iranian revolution or how a film production was faked. It is marvellously streamlined. In many respects the scale of the story is rather small, but that allows Affleck to focus on the characters, and the tense journey with the diplomatic staff through Tehran in the hope of escaping the country.

This kind of intelligent, straightforward thriller used to be commonplace in Hollywood. These days it is sadly rare, lost in a sea of franchise pictures and superhero sequels. We are lucky that Affleck is out there adding such a wealth of talent to American cinema. Thanks to his firm directorial hand, Argo is a damned good movie.
Posted by Grant at 6:46 PM