Doctor Who: Series 1 in review 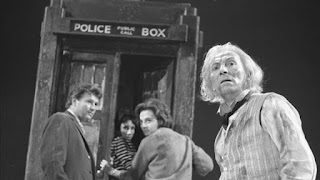 After 42 episodes, Doctor Who's first season (or series, as the BBC referred to seasons at the time) came to a close. It encompassed eight separate serials, which generally alternated back and forth between historical adventures and science fiction stories. It remains one of the most interesting seasons of the series, not simply because it was first but because there really wasn't a clear idea of what the series was actually supposed to be.

One of the key instructions by drama head Sydney Newman (who nominally created the series with a huge amount of input from several other people) was to tell proper science fiction stories without what he referred to as 'bug-eyed monsters'. That instruction went out of the window by the end of episode 5, much to the series long-term benefit. Had the Daleks not given the series an extraordinary shot in the arm in terms of viewing figures, it's possible that Doctor Who would never have made it out of its first year.

It is interesting to see just what a different character the Doctor is to the version with whom fans and viewers are familiar. When we meet him he is not only cantankerous but actively hostile. He kidnaps Ian and Barbara and then fails to return them home for the full year. In the first serial, "An Unearthly Child", he is caught seriously planning to murder somebody. This ambivalent portrayal of the character, full of petty bickering and self-centred arrogance, is not a huge issue in this first season because for now the focus is fairly evenly spread across the four leads. The Doctor may be the titular character, but centre stage is occupied more often than not by Ian and Barbara.

There is a significant change in "The Sensorites", however, as for the first time the Doctor stops trying to escape in his TARDIS (a constant motivation during this first year) and actively works to help the Sensorite people. You could make a fairly good argument that it's the influence of Ian and Barbara that has given him this change of heart. While there is still a way to go before the character transforms into the one with whom audiences are most familiar, you can see him moving firmly in that direction.

There is a sense of experimentation in these early serials. Despite all being historicals, "Marco Polo", "The Aztecs" and "The Reign of Terror" are all distinctly different in style. Similarly there's a world of difference between the "The Daleks", "The Keys of Marinus" and "The Sensorites". Buried among them there's the particularly odd "The Edge of Destruction". You can sense the production team shifting about, attempting to decide which angles work and which do not.

To my mind, the three serials that work the best are (in broadcast order):
On the other hand, the three that impressed me the least are: