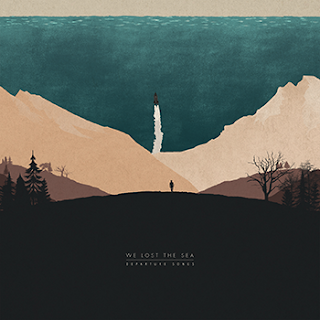 We Lost the Sea are an instrumental prog-rock band based in Sydney. Departure Songs is their most recent album, released in 2015, and I have to say from the outset that this is the single-best album I have heard for the first time this year. I purchased the CD at a concert when they were supported Finnish metal band Apocalyptica, and I've had the disc on pretty constant rotation ever since. This is an epic recording, dealing with grand themes in a huge, near-overwhelming fashion.

Upon first inspection it seems like Departure Songs is more of an EP than a full album, since it only lists five tracks. What the sleeve doesn't tell you is just how long these tracks are. The album as a whole is more than an hour long. The central track, "Challenger - Flight", is 23 minutes or more on its own. That might sound pretentious, but the truth is every track on this album earns its length. There's a level of intensity and emotion that you can only reach with a slow, measured build and a grand, extended climax.

"A Gallant Gentleman" launches the album with a combination of slow electric guitars and a deeply haunting choral singing. When it finally kicks into gear at the three-and-a-half minute mark it's tremendously cathartic. This is the shortest track of the album at a sprightly six minutes.

"Bogatyri" begins with a striking, quite small guitar melody. Then it has a little pause before restarting with just a bit more energy and a slightly heavier sound. The basic structure of the track is identical to "A Gallant Gentleman", and indeed the album as a whole: start small, add layers one by one, and keep building until the song can't take any more elements without collapsing. While that structure is the same, the song most definitely is not. The melody is obviously different - it reminds me a lot of a 1960s film soundtrack, to be honest - but the style and tone is different too. At double the length of the earlier track, it also has a lot more room to build. Build it does: by about seven or eight minutes it has the pounding rhythms and unstoppable momentum of an action movie soundtrack. Then it all comes crashing down and fades away in a mess of distorted guitars.

"The Last Dive of David Shaw" is longer still: close to 17 minutes. It begins in a rather creepy near-silent fashion, with just a solitary breathing sound and small trickles of water as well. When listening to the album attentively it actually tests the patience slightly. When playing the album in the background, the song actually creeps up you slightly - you're listening to the song without ever really being aware that it ever started. Then at about the five-and-a-half minute mark, everything seems to stop. We're back with the water and the breathing. Thirty seconds later and the music enters again, slightly different in tone: colder and more hesitant. Then it builds, and builds, and builds. While still a very good track, there's something to the melodies and structure of "David Shaw" that makes it the least accomplished track of the album.

Let's pause before the last two tracks, because there's something about Departure Songs that I haven't mentioned. It's an album with a clear and open theme, and one explained beautifully in its sleeve notes. In 2013 We Lost the Sea's lead singer Chris Torpy took his own life. This album, the first since Torpy died, did not replace him and the band has pushed forward as a purely instrumental outfit. Every song on the album is a narrative one, and each focuses on a different heroic yet tragic death. "A Gallant Gentleman" is about Antarctic explorer Lawrence Oates who, faced with impending death, famously walked out of his tent and into the snow to give his companions a little more time to survive on the dwindling food supplies. "Bogatyri" is dedicated to the three Ukrainian technicians who willingly dived into the pitch-dark and flooded bowels of the Chernobyl nuclear reactor to release a valve and avoid a total explosive meltdown. "The Last Dive of David Shaw" follows its titular diver, who died attempting to retrieve the body of a drowned man.

Without the back story, these are great songs. With the back story in mind, they become phenomenally profound and deeply effective. So much emotion is poured out in this music, it's positively staggering.

"Challenger", which closes off the album, is an enormously long and well-considered musical odyssey, told in two parts, that simply stands head and shoulders above everything else on the album. It opens with narration by William S. Burroughs about the necessity for dreams. It ends with Ronald Reagan eulogising the crew of the Challenger. In between we musically experience the preparation for launch, the launch itself, and that terrifying, seemingly endless moment in which the shuttle's booster rocket ignited and took the entire ship with it. I was a child when Challenger exploded, but it left a tremendously profound effect on me. I still clearly remembering watching the news coverage on television. Like the rest of the album, without the back story it's a great prog rock song with complex inter-weaving guitars and a driving melody. Listening to it with the knowledge of its subject matter, and it becomes a tremendously effective and genuinely heart-breaking work of art. The shorter second part of "Challenger", which essentially acts as an epilogue to the whole album, manages to be the most bittersweet and strangely uplifting song imaginable.

There are still quite a few weeks left to 2016, so there's every chance I might get amazed by another album at the last minute. Assuming that doesn't happen, We Lost the Sea's Departure Songs is absolutely the best thing I've heard all year. My only annoyance is that it took me a little over a year to discover it.