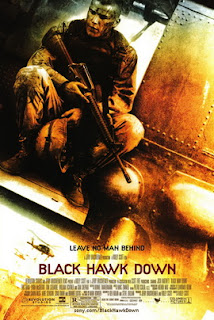 In October 1993 a United States military mission to enter a heavily defended part of the Somali city of Mogadishu and capture two senior lieutenants of the militia warlord Mohamed Farrah Aidid went disastrously wrong. Two black hawk helicopters were downed by enemy fire, and the soldiers in the combat zone became pinned down by militia fire. By the next day, when the majority of the soldiers were successfully extracted, 18 American soldiers were dead, 78 were wounded and somewhere between 1,500 and 3,000 Somalis had been killed.

Black Hawk Down is a 2001 film produced by Jerry Bruckheimer and directed by Ridley Scott that replays those events out in a semi-fictionalised format. It is a tightly focused war movie, ignoring the political and moral debates of US and UN involvement in the Somali civil war and focusing instead on the capture attempt, its failure and the ultimate rescue mission. As far as war movies go, this is one of the noisiest and most chaotic-looking examples of which I can think. War, as they say, is hell, and it seems Scott was pretty intent on showing an audience what that is like.

Black Hawk Down is a film that focuses almost exclusively on the moment-to-moment experiences of soldiers under fire. It does not spend any time examining the justification for American involvement in Somalia, or the political backdrop to the civil war there. It does not question American military methods, and it certainly does not provide any insight into the Somali sides of the conflict. Instead, we see the attempt to capture two militia leaders fail, and then spend another two hours watching a series of run-and-gun firefights, tense down-times in shelled buildings, and people getting injured, crippled and killed in sprays of bullets.

This visceral approach has an awful lot to recommend. It refuses to let up and allow the audience to rest. It puts the viewer in the place of the soldiers and gives an impactful experience of what modern warfare looks, sounds and feels like. Rather notably when a soldier dies you really feel it. It's messy, unpleasant and is captured in a matter-of-fact, unflinching manner. One shot in particular, as a ranger observes the floor of a humvee soaked in blood and scattered with viscera, is particularly sobering.

Ridley Scott is a great choice for this kind of take on the war film. He has a strong visual style to all of his films, and makes no exception with Black Hawk Down. In fact the sharp, jagged cutting and colour-tinted footage makes the film look an awful lot like the films of his late brother Tony - it is probably not a coincidence that the producer of this film, Jerry Bruckheimer, produced most of Tony Scott's most acclaimed hits.

The film employs an extended ensemble cast, with each group of soldiers trapped in different circumstance. It would be very easy for the film to collapse into a confusing mess, however the screenplay cleverly exploits General William F. Garrison (Sam Shepard), who watches over events via satellite footage at the American base camp. Despite being unable to offer much assistance to his men, his constant monitoring the action gives everything a context and streamlines the otherwise complicated story.

Of course the film does have other problems, most of them related to how it changes actual events. Pakistani involvement in rescuing the trapped soldiers is minimised, which understandably antagonised the real-life Pakistani soldiers who risked their lives helping to dig the Americans out of their own mess. The film does not contain a single Somali actor, with all Somali roles - small as they are - played by Moroccans instead. The Somali militia are presented in about as faceless a manner as possible. Taken in isolation it's clear why - this is an American film about American characters - but in a broader context the presentation of the militia groups as savage, bloodthirsty and essentially anonymous hordes makes for rather poor optics.

I think it is important to accept Black Hawk Down for what it is and what it is attempting to be, rather than judge it based on things we might rather wish to see in a different sort of take on the Somali conflict. It is a slick, well-paced epic of combat and violence that packs one hell of a punch.
Posted by Grant at 5:05 PM