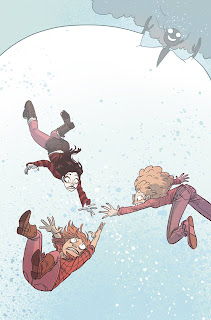 John Allison's Giant Days is a regular delight, showcasing the humorous adventures of three university students. The tone is great, the jokes stem naturally from the characters, and many of the events and crises are all-too-familiar to anybody who has ever gone to university.

This special-length holiday special provides Allison with the chance to tell out-of-continuity stories, primarily with a 'what if our heroes never became friends' storyline. It's reasonably funny stuff, although to be honest the novelty value is not quite enough to sustain it compared to regular issues. A back-up story based around a fish monster coming to stay for the holidays has a nice touch of whimsy.

The back-up strip features art by Caanan Grail, but the main strip features the return of original Giant Days artist Lissa Tremain. While I have really enjoyed the work of her replacement Max Sarin, Tremain's work retains a lot of sentimental appeal because she was the first artist that the characters had.

This is, like most annuals and specials, a non-essential purchase, but if you're a fan of the series there is certainly enough here to make it worth your money and time. (3/5)

Under the cut: reviews of Action Comics, Detective Comics, and Descender.

Lois Lane is confronted by Superwoman, who knows that she is masquerading as her now-dead New 52 doppelganger. To an extent this issue is one massive information dump, pulling together a lot of complicated plot threads and pushing them along. Thankfully Dan Jurgens expresses it all with a lot of depth and warmth. The issue is also working with an interesting set of story elements: Superman died, Lois and Lana Lang gained superpowers and Lois died as a result, a new Superman and Lois arrived from before the New 52 continuity, and yet a third Clark Kent has turned up who doesn't appear to be from Krypton. The Superman comics haven't been this enjoyable in quite a few years, and in the same vein Jurgens hasn't been writing this well in ages. (4/5)

With "Night of the Monsters" out of the way, along comes "The Victim Syndicate". Waynetech has been attacked, but Batman is too busy mourning Tim Drake's apparent death to intervene. In steps Batwoman, taking the lead over the remaining vigilante team. This book is making really strong use of the extended Batman supporting cast, including returns for Harper Row and Luke Fox. Neither seem to do much in costume any more, but I am hoping this will change in the coming issues. Certainly the cliffhanger promises a very interesting new set of villains. (4/5)

The third arc concludes with a special focus on the heavy mining robot Driller, who is currently holed up with the scrapper Andy. You would think his story, told here in flashback, would be the least interesting of the set. Instead it's possibly the best, telling a simple but effective story of friendship in adversity, human cruelty, and terrible crimes undertaken in the heat of the moment. The pace of Descender has been rather messy, and while the series of individual flashback issues has helped flesh out the cast and their environment, it has dragged the actual story to a near-standstill. Hopefully with this out of the way Lemire and Nguyen take the opportunity to pick up the pace again. (4/5)
Posted by Grant at 7:51 AM