Sleaze: A Glass of What Reminds Me of Lovesick Potions (2012) 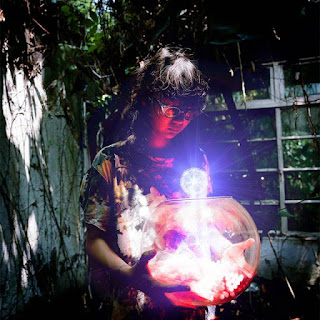 Sleaze is a five-piece independent rock band from Taipei. Their debut album was released in September 2012, with a title that translates from Chinese into English as A Glass of What Reminds Me of Lovesick Potions. I assume that the band is now defunct: their Facebook page has not been updated in more than two years, and there doesn't seem to be any sign of a follow-up album or recent tours online.

If true, it's a real shame. This is a hugely enjoyable and inventive rock album that weaves together a broad range of styles and influences. It's certainly on the heavier side of rock music and regularly edges towards classic metal forerunners from the early 1970s, but then it also regularly throws in surprising elements including reggae and psychedelic rock. It throws all of these elements in together, sort of roughly blends them, and winds up with a distinctive tone of its own.

The album begins with a slow, sort of spiritual lead-in titled "Mercilessly Sets the Sun, Confidently Comes the New Day.

Crashing garage sounds lead into a slower, old-school heavy rock number: "Cozy Tender Loving Den". Can hear a lot of riffs reminiscent of Led Zeppelin, Black Sabbath and the like. Fairly rough production values, but at almost seven minutes it is wonderfully epic.

Much faster tone in the third track, "Doit", which introduces elements of punk and heavy metal. "A Dream in a Dream in a Dream" feels like there is a tiny bit of surf rock influencing the first minute or so, but then it suddenly gets much heavier. At more than eight minutes in length it's the album's longest track, and it encompasses quite a progression in tone and style as it goes. The next track, by contrast, is much faster and is over and done within 30 seconds - it's an odd bit of filler without any real justification to be there at all.

There's an unexpected burst of reggae thrown into the title track, a song that feels distinctly different to the rest of the album before it. It's actually a little bit jarring, to be honest, but does showcase a whole different side to the band. That's followed up by another change, as Sleaze turn to full-strength punk-rock. There's a lot of energy, but at the same time not a huge amount to make the song stand out. With "Delusional Gain Fictional Loss" the style flips back, feeling particularly like a lost Black Sabbath number in its early stages. That old-fashioned mixture of early metal and psychedelic rock flows on to the ninth track, which to be honest felt a little underwhelming. Things pick up marvellously in the tenth, however, which is another punk song - in this case a much stronger one. I apologise for not providing titles for some of these songs, which are listed on the sleeve in Chinese.

The album comes to a close with "Such a Tragedy Does Not Repeat Itself Before You Die". It's a great finale packed with energy and power. Sleaze are a great band, showcasing a nice heavy rock style with the Chinese lyrics giving them a comparatively unique edge when compared to the American and British bands that seem to have informed their sound. It's a deep shame that this appears to be all that we are ever going to get.