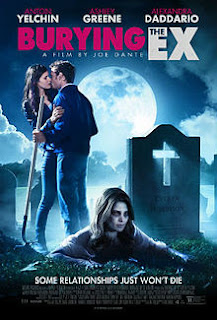 Horror movie fanatic Max (Anton Yelchin) finally decides to break out with his aggressive vegan girlfriend Evelyn (Ashley Greene), however moments before telling her he sees her fatally struck by a bus. Moving on with his life, Max grows attracted to fellow horror fan Olivia (Alexandra Daddario). Then Evelyn rises from the grave, intent on continuing her relationship with Max over Olivia's dead body.

Burying the Ex is a 2014 horror comedy directed by genre stalwart Joe Dante. I really wanted to like it. I like Dante as a director more often than I do not, and with this low-budget production he has assembled a very strong and likeable cast - particularly the late Anton Yelchin, whose work was always impeccable no matter the quality of the film. Unfortunately the film is saddled with a particularly weak screenplay, that mixes elements that are predictable and tiresome, and in one or two places a little bit repellent. By all indications the film should be a fun 90 minutes. Instead it's an active chore to sit through, and potentially the worst film Dante has ever made.

I honestly don't quite understand Joe Dante's career. Some of his films, like The Howling, Gremlins and the criminally under-seen Matinee and The Hole, are rock-solid. Others, like Small Soldiers, Inner Space and Looney Tunes: Back in Action, feel horribly underwhelming and by-the-numbers. Burying the Ex honestly feels like the first one of his films to seem actively awful. Quite how he came to direct it and make such a tiresome bore as a result is a real mystery to me.

Alan Trezza's screenplay is the cause of most of the film's woes. The characters are not in any proper sense believable. Max and Olivia are presented as ardent horror lovers who recite pop culture references in lieu of characterisation. The idea of making the protagonists of a horror film fans of horror themselves is a trope that feels effectively mined out via the likes of Shaun of the Dead and Scream, while zombie-based comedies also feel excessively reheated too. Trezza simply fails to discover a fresh angle on the material.

Evelyn is presented as a lazy stereotype of the shrill controlling vegan, playing its jokes around her being that cliche activist who treats the natural world with respect but other human beings with loathing and disdain. It's a weak character and by this day and age it's a worn-out target - it doesn't feel edgy or satirical but simply mildly distasteful. In focusing so much on mocking Evelyn's food choices Trezza somehow skips over what could have been a comedy goldmine: a vegan with a sudden craving for human brains. In what is supposed to be a comedy film that sort of oversight is unforgivable.

Anton Yelchin and Alexandra Daddario do their best with the material and to their credit manage to make some of the film's scenes at least superficially watchable. They're both engaging actors and they generate a lot of nice chemistry together. Yelchin's death earlier this year was a terrible loss to American film. Daddario thankfully remains with us. I have yet to see her in anything particularly good - she played Dwayne Johnson's daughter in San Andreas, for example - but she has been strong and engaging in every role in which I've seen her. I really hope she finds some good material soon, because she deserves it.

As director Dante seems to add little to the film. It lacks any particular style or distinctive tone, and the comedic pacing regularly feels slightly off. I really hope he bounces back with something good in the near future. His last feature, The Hole, was a wonderful children's horror movie, and suggested that as a director he still had a lot to contribute to the genre. Burying the Ex really does suggest the opposite. At the end of the day it's simply a comedy that isn't funny.
Posted by Grant at 5:21 PM