Star Trek: The Next Generation: "Realm of Fear" 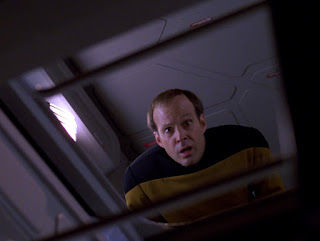 It is 28 September 1992, and time for another episode of Star Trek: The Next Generation.

While the Enterprise investigates the death of the entire crew of an abandoned Starfleet vessel, Lieutenant Barclay's (Dwight Schultz) fear of transporters appears to be well founded when he witnesses worm-like aliens inside the matter stream.

Reg Barclay, as played by Dwight Schultz, was a great character when he debuted in "Hollow Pursuits". That was an episode that broke the rules of TV drama to focus on a guest character with a specific story to tell, and using the regular cast entirely in supporting roles. It was clearly a hit, because a year later Barclay was back again in the much less successful "The Nth Degree". Now we're two more seasons on, and the character has returned for a third time. There's a law of diminishing returns to Barclay, and it contributes to this episode pretty much failing entirely.

Schultz's nervous, awkward schtick worked well the first time. Here it simply irritates. Out of nowhere the character now receives a deeply held transporter phobia, which feels tacked-on and entirely unconvincing. The development he received in his original appearance now seems fully erased, and what was an interesting character then is now effectively mugging for the camera. Had he only appeared once, I suspect Barclay and Schultz's performance of him would be remembered much more fondly. As it stands he's one of the characters I dread to see turning up.

There are two parallel strands running here. In the first a transporter accident has pretty much killed the entire crew of a Starfleet vessel. In the second, Barclay reluctantly beams over to the ill-fated ship and sees strange worm-like creatures while in mid-transport. On one level it is rather clever that the two strands intertwine by the climax - the worms Barclay is seeing are actually crew members trapped in the matter stream. When he grabs onto them, he can pull them back to reality with him. That is at the basic level rather clever. What makes the concept collapse is that they look like worms. There's no explanation given for this and no logical one to develop on one's own.

Colm Meaney gets a nice supporting bit as Miles O'Brien. By this stage Meaney had already accepted an offer to become a series regular on Star Trek: Deep Space Nine. This episode marks his third-last appearance in The Next Generation, and its clear he's being highlighted here to ease him into his impending larger role.

"Realm of Fear" is rather a chore for the viewer, and a disappointment after how enjoyable "Time's Arrow, Part II" turns out to be. The quality ratio for Season 6 stands at 50 per cent.
Posted by Grant at 5:14 PM