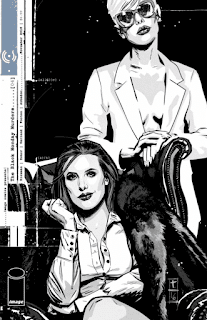 I have not seen a lot of buzz online for The Black Monday Murders, a dark modern-day occult fantasy by writer Jonathan Hickman and artist Tomm Coker. That's a real shame, because it's probably one of the best series of the year.

The series posits that behind the scenes of the world's largest financial institutions there's a world of occult magic and ritual murder, with the world controlled by a small group of elite families via spells and incantations. One of these elites has been murdered, and while an unwitting police detective falls down the rabbit hole into a world he had never imagined the victim's sister is clearly plotting a terrible revenge.

Each issue is much longer and denser than your usual monthly comic book, because it's packed with strange additional content: newspaper clipping, redacted reports, diary entries and letters. It's a complex and initially overwhelming world that Hickman and Coker have created, and it's taken time for it all to settle down and become more understandable. This is definitely a book I would recommend picking up from issue #1, because to come in halfway through would likely be futile. Coker's art is sensational, and Hickman remains one of the best writers American comic books currently have. The book goes on a brief hiatus after this issue, with a collected edition of the first arc due in January. Now seems the perfect time to catch up. (5/5)

Under the cut: reviews of Action Comics, Batgirl, Detective Comics, Lake of Fire and Usagi Yojimbo.

A pair of alien zealots have arrived on Earth to kill Lex Luthor, having foreseen a future where he replaces Darkseid as the universe's most tyrannical despot. That does not sit well with Superman, who is a much bigger fan of people being innocent until they actually commit a crime, so it's wall to wall super-powered fistfights over Metropolis instead. It's a nice way of getting Superman and Luthor - who obviously continue to hate one another - teaming up against a mutual enemy. It's well paced, includes some great moments for Superboy, and dynamically illustrated by Tyler Kirkham. Superman comics haven't been this consistently enjoyable in a long, long time. (4/5)

Batgirl finally learns the truth behind the serum everyone has been hunting for across Asia. I've been generally underwhelmed by this arc: it's felt like a huge missed opportunity, with Barbara travelling from Singapore to Japan to Seoul and now finally to Shanghai but never really taking up the story possibilities of each city. The storyline has felt relatively ordinary, and even though this issue presents the climactic showdown between Batgirl and the villain (named Teacher, which isn't exactly exciting-sounding) there simply isn't much here to raise my interest. I'll be checking out the second arc, which puts Barbara back in Burnside where she's been for the last year or two, but at the moment Batgirl is a hair's width away from getting dropped from my pull list. (2/5)

The First Victim has successfully got into Stephanie's head, but she's not telling anybody what he really said. Meanwhile Batwing joins the team, and and Dr Leslie Thompkins starts counseling the members of Batman's team. It's a lower-key issue than the last, but that leaves a lot of room for character development, relationship building and one hell of a cliffhanger ending that I swear is going to be an irritating fake-out when the story picks up in two weeks' time. This issue's art comes from two sources - Barrionuevo for one half, and Carnero and Hanna for the other - and it makes the issue a bit of a jumpy read. (3/5)

The surviving crusaders take the fight to the aliens, descending into their lair and discovering the titular 'lake of fire' at last. One element I really enjoy about this series is just how well-rounded and nuanced the characters are. With one exception (a villain), they have contradictory moments. A character who seems spiteful can suddenly express compassion. A character who seems cowardly can actually do something brave. They feel like believable people, and not just fodder for the book's grotesque insectoid invaders. (4/5)

Usagi stumbles upon a murdered samurai, and his silent daughter hidden nearby. While taking her into town and the care of Inspector Ishida, he is confronted by the samurai's killers - who now want the girl as well. This partially self-contained issue is ultimately a prologue to a presumably larger storyline just around the corner. That takes a little bit of the wind out of its sails, but it's still a beautifully illustrated issue with Sakai's neatly composed action. Sometimes when the standards are this high, being merely 'really good' winds up feeling like a disappointment. (4/5)
Posted by Grant at 9:24 AM