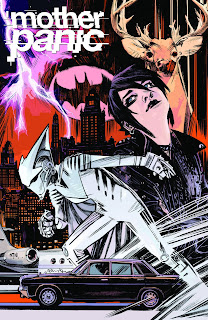 The fourth title in Gerard Way's new Young Animals imprint is Mother Panic, a new Gotham City-based vigilante series by writer Jody Houser and artist Tommy Lee Edwards. Unlike the other three - Doom Patrol, Shade the Changing Girl, and Cave Carson Has a Cybernetic Eye, Mother Panic is an entirely new property. The setting may be familiar, and Batman even makes a brief cameo here, but it focuses on an all-new heroine with a fresh perspective.


It's obviously a bit early to tell with just one issue out, but I am honestly unsure if Mother Panic has legs to run for very long. It is by far the most conventional of the Young Animals line, and essentially tells the story of yet another Gotham City vigilante. There simply isn't enough here to distinguish it enough. Tommy Lee Edwards' rough, sketchy artwork feels like a ill match for the story material as well - a rich socialite who secrets works as a masked hero by night. This is not a bad comic, but I really do not know if it is good enough to recommend. Better titles are out there, and you should probably read them first. (2/5)

One of the less closely examined elements of the current Superman comics is Lex Luthor. Armed with technology stolen from the New Gods, he has styled himself into an all-new Superman to replace the Kal-El who died. Just when he made his debut, so too did another Superman - the post-Crisis, pre-Flashpoint Superman - who doesn't trust Lex one inch. Now both men must work together when powerful time-sensitive aliens come to kill Lex before he can become a terrifying despot in the future. Lex is a great character, and it's great to see him get some attention in this new storyline. Tyler Kirkham's artwork is great, and Dan Jurgens' script is strong and well characterised. It's great to see Action Comics getting treated with such care. (4/5)

A gala event for Gotham's police is hijacked by the Victim Syndicate, a new gang of super-powered villains with a personal grudge against Batman. Thankfully Bruce and his allies are already on the scene. It's a pretty good achievement after more than 75 years to create an exciting new villain in a Batman comic, so it's actually remarkable that James Tynion IV introduces not one but five. All of them have ongoing potential as second-string antagonists, and Tynion gives them a very effective hook to explain who they are and why their agenda is what it is. It's also great to see Batwing back in action, and I suspect he may be taking Tim Drake's role in the team going forward. (4/5)

Following the events of Star Trek Beyond, the crew of the USS Enterprise have been re-assigned. Kirk has temporarily become captain of the starship Endeavour, which has responded to a distress call from the USS Concord. Arriving to discover the ship in pieces, the Endeavour receives just one message from the attackers: 'resistance is futile'. So this is, rather obviously, the 'Kelvin timeline meets the Borg' storyline, and it comes with all of the problems such a storyline entails. We know the Borg well after seeing them progressively driven into the ground, creatively speaking, in The Next Generation, Voyager and even a sole episode of Enterprise. Kirk and his crew have not, which means a lot of reading people learning things that we already know. This storyline is working as continuity porn, but as a gripping narrative it's too bogged down to properly function. Some readers will likely love it. I found myself wanting something stronger. (2/5)
Posted by Grant at 11:15 PM