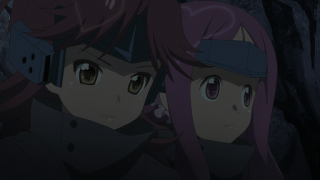 As the DES intensifies its attacks against AKB and the rebels of Lancastar, Nagisa convinces a team to help her enter a detention centre and rescue her imprisoned father. When he refuses to leave with her, she suffers a crisis of confidence right on the eve of the understudies' first public performance.

AKB0048 dives straight into the action with episode, not even bothering to include the usual opening title sequence. That momentum pretty much continues throughout. There is a sense of coming full circle with the series returning to the planet where it began, and the relevant characters recalling their origins. While there are occasional flashes of humour, this episode is wall-to-wall overwrought melodrama - whether for good or bad depends on the viewer's taste.

To my mind it goes a bit too far: Nagisa may persuade a team to help rescue her father, but when she reaches his cell he orders her to leave without him. Afterward she learns he was only imprisoned because he refused to tell her to quit AKB and return to Lancastar as the DES ordered. Distraught and ashamed, she wakes up the next morning and cannot use her voice. It is psychosomatic. Her guilt prevents her from being able to make a sound.

That's kind of silly. In some respects that is a ridiculous accusation to make of what has been a generally silly and bizarre melodrama overall. The fantastical elements I can accept. The weird set-up of armed rebel pop groups fighting anti-entertainment totalitarian governments I can accept. For some reason losing your voice because of emotional upset does not wash with me. It feels forced, and one step too unbelievable for me to accept. This is always the way: you can throw alien, unnatural elements into your narrative as much as you like and the audience will roll with it, but it is always the small unrealistic touches that are going to kill suspension of disbelief.

At the same time Takamina reveals she is still suffering from the trauma of her injuries some episodes back. That stands in sharp contrast to Nagisa's voice loss, because long-term trauma is a realistic element that you often do not see anime dramas tackling.

When the climactic concert begins, there's something of a tonal whiplash. The bulk of the episode has been dramatic and coloured with dull, dark tones. When AKB0048 start performing, it's suddenly bright, musical and vividly colourful. After 15 minutes of sobbing teenagers, seeing a bird-shaped stage spaceship from which a group of teenagers perform a pop concert, all the while defended by another group of teenagers using love-heart wands to shoot at tanks from their flying dance platforms, is a little bit jarring to sit through.

The rush towards the season finale in episode 13 helps "The Idol Who Sings of Love" smooth over some of its problems, but this is a pretty messy episode. 12 episodes in, and Season 1 has had eight good or better episodes. The quality ratio slips down to 67 per cent.
Posted by Grant at 9:59 PM