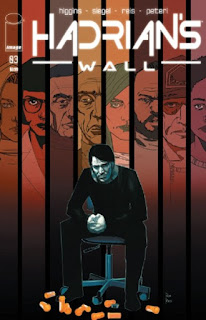 Investigator Simon Moore has been dispatched to the spaceship Hadrian's Wall following the death of one of its crew. It should have been a formality, save for a few details. Firstly, Moore quickly grows to believe that the dead man was murdered. Secondly, his ex-wife is one of the ship's crew. Thirdly, the man for whom she left Simon is the man who died.

Hadrian's Wall is a classic murder-mystery with a small list of suspects, a confined location that has prevented anyone from escaping, and a cat-and-mouse game between a detective and an anonymous murderer desperately attempting to cover their own tracks. Rod Reis' artwork is fantastic, giving the entire comic a great early 1980s aesthetic. The characters are visually distinctive and are realistically emotive. Kyle Higgins' script is doing a strong job of blending the necessary twists and turns of the mystery genre while peppering the whole issue with little touches of science fiction detail.

Simon Moore is a great protagonist. He's clearly holding his own secrets pretty close to his chest, and that is making him a fascinating sort of unreliable protagonist. He is addicted to painkillers, but someone has broken into his quarters and poured them down the sink, so in addition to investigating a murder against everybody's wishes he is also going through the early stages of drug withdrawal.

This is only the third issue out of eight in this miniseries, so the story is progressing in increments: some things get proven here, some secrets are revealed, and the issue ends with a nice complicating twist that seems set to make Moore's job even more difficult. This is another outstanding science fiction book from Image that is becoming more gripping with each issue. (5/5)

Under the cut: reviews of Aquaman, Doctor Strange, Green Arrow and Mechanism.

In a prologue to "The Deluge", Mera and Arthur are reunited, the Justice League arrives, and things look momentarily positive for the people of Atlantis - until a shock cliffhanger ending ruins everything. This is a solid bridging issue, tying up some threads left from the first 10 issues so that from the 12th the book can push forward at full speed. Briones' artwork is solid, and the steadily expanding supporting cast are well represented. I've mentioned this a few times in recent weeks, but DC really is benefiting from this current serialised style for its main books. All of these storylines are getting such a great sense of momentum. (3/5)

Strange is trapped in the diner from hell - literally from hell - with the devil's daughter Satanna trying to feed him soul-destroying bacon. I just can't get a handle on this book. The first storyline was okay, but a little too reminiscent of Aaron's earlier work in Thor: God of Thunder, but this second arc is just one big rolling tour of old Doctor Strange villains. It's very difficult to get too invested at the moment because it all feels so abrupt and whimsical. Bachalo's artwork continues to frustrate me. It's visually a bit too busy and dense to be immediately readable. I love that there's a new volume of Doctor Strange on the shelves, and I love that it's doing well (just under 70,000 readers in print), but I can't help but think there could be a much better book getting made here. (3/5)

Green Arrow, Black Canary and Diggle race to capture an assassin who has just murdered a key diplomat on a deep sea high-speed train. This is, like the issue before it, simple superhero entertainment. There's not a lot of depth, it moves at a fast pace, the tone is bright and breezy, and a lot of the fine details - like the laws of physics - simply don't really get a look-in. I am adoring Juan Ferreyra's artwork on this book: it's dynamic, painterly, and beautifully coloured. The cover is great as well, with a nice sense of movement and a sort of retro movie poster layout. (4/5)

The first volume of Mechanism comes to a pretty apocalyptic close, as the alien Geckos invade the walled city of Rio and the salvation that appears to come is not exactly what it appears. Ienco's artwork has really sold this series, with beautiful detail and nice colouring. The story has been a little more difficult: it's good, and had a lot of great detail and clever ideas, but structurally it feels better suited to a graphic novel than a five-part serialisation. The collected edition is released early in 2017; if you haven't tried Mechanism already it may be best to wait for its release and try it all in one go. (4/5)
Posted by Grant at 5:06 PM