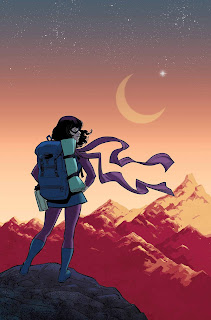 Ms Marvel has consistently been one of Marvel's strongest regular titles, thanks to a strong and immensely likeable protagonist, distinctive artwork by the tag team of Adrian Alphona and Takeshi Miyazawa, and particularly G. Willow Wilson's warm, well-informed and emotive script-writing. She is essentially the most Marvel-esque character that Marvel currently publishes. With Peter Parker now a rich, successful thirty-something, the mantle of Marvel's down-on-their-luck, can't-cut-a-break young superhero has absolutely fallen onto Kamala Khan. She is pretty much the character find of the decade.

In classic Parker fashion Kamala has been through a real wringer of late. Via the event series Civil War II she picked a side in a fight and saw Bruce Banner die as a result. She was forced to turn against her idol and mentor Captain Marvel. Her best friend was critically injured and now doesn't want to ever see her again. Hurting and devastated, she leaves New York for Pakistan - and gets sucked into a short little superhero adventure of her own.

The writing and art (in this instance by guest artist Mirka Andolfo) are predictably excellent. Where the issue really excels is in dislocating Kamala from her New Jersey setting and throwing her deep into her own family's culture in a different country. It feels sharp and original, and while it appears to be done and dusted in the space of one issue it's clear there are some intriguing seeds being set up for the future. I love it when superheroes travel abroad, because it's usually par for the course for both DC and Marvel to stick to the USA's east coast. Seeing a world of culturally diverse heroes is always a welcome development. (5/5)

Under the cut: reviews of Poe Dameron, Seven to Eternity, and Silver Surfer.

Poe takes a vacation, which predictably descends into chases, gunfights, fist-fights and interrogation at the hands of the First Order. It's a neat little story by Charles Soule, reuniting him with an old friend turned journalist turned information seller, but for me the real star is guest artist Angel Unzueta. There's a real sense of pace and motion here that regular artist Phil Noto often fails to generate. It feels a more energetic book this month, and that makes it a much stronger read generally. I really hope Unzueta hangs around - or at least comes back soon. (4/5)

After the violent death of his father, Adam Osidis has travelled down from the mountain to confront the powerful Mud King that ordered the murder. Jerome Opena's art and designs are fantastic, evoking a huge fantasy world surrounding the story. Rick Remender's script is slightly less successful, throwing in a flashback followed by an unexpected and slightly disorienting fight scene. It's all solid stuff, but perhaps needs just a little bit more world-building before dropping the reader so deeply into the conflict. (3/5)

Dan Slott and Michael and Laura Allred's run on Silver Surfer has been trapped on Earth in recent month, and that's really not the best location for what should be a whimsical delight. This issue sees Norrin and Dawn fly off into space again, and it makes a world of difference. In the Casino Cosmico they begin to gamble for fun, and get sucked in so badly they lose the surfboard, the ability to see the colour red, and the letter "B". This issue is pitch-perfect for the Slott/Allred take on the character, and the best story the book has run since its renumbering earlier in the year. Hopefully the high quality continues. (5/5)
Posted by Grant at 8:36 AM