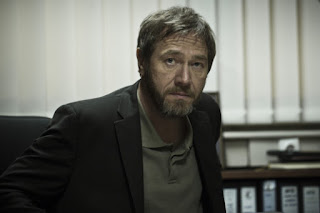 It is 9 November 2015, and time for another episode of The Last Panthers.

In London, Naomi (Samantha Morton) leads a surveillance team to track down and capture the stolen Marseilles diamonds. In Marseilles itself, the aftershock of Kahlil's (Tahar Rahim) police read lead him to reminisce on his troubled youth. In Belgium, Milan (Goran Bogdan) is faced with a choice of siding with the new or old order of his criminal gang. Back in Belgrade, Tom (John Hurt) challenges the Panthers' participation in the new international airport project.

The Last Panthers is a clever juggling act, with writer Jack Thorne balancing four simultaneous storylines with deftness and style. That said, with three episodes over the line and the series at its halfway point, there does seem to be a growing need to connect the disparate storylines a little more closely. They have all spun out from the one violent jewel robbery, but there is a need to tie them together as soon as possible - otherwise the audience is simply watching four simultaneous crime dramas.

Of the four story threads it is Milan's that feels the weakest at this point. He has been thrown back into the old crime gang with which he used to work, but it is packed with fairly unpleasant people and therefore not altogether engaging. He does face the choice of saving the gang's old leader or following its new one, but as the audience has not really been given enough background to take a side it's dramatic potential is rather weak. Hopefully it will set up some stronger material in future episodes.

Kalhil's dogged investigation into the gun trade that supplied the heist is much more intriguing. It is over-reliant on flashbacks, showing a teenage Kalhil getting neck-deep in the trade himself, but the present-day sequences are well paced and shot. This part of the episode actually does seem to undertake a bit of the tying-together that I have been craving, when Kalhil's boss Roman (Olivier Roubardin) unexpectedly appears in connection with the injured jewel robber Rajko from episode 1. It is a great development.

Naomi's surveillance of a jewel fence forces her to work with her ex-husband Michael (Joseph Mawle). While the discomfort is well played by both actors, it does feel like a weird addition to the story. It verges a little on soap opera, to be honest, and hopefully Michael's appearance will be restricted to this episode.

One superb aspect of this series I have yet to mention is the way in which it is shot. The series uses a wide 2.35:1 aspect ratio, of a kind usually seen in big-budget Hollywood tentpoles and Japanese samurai flicks. It gives the entire series a cinematic look and feel that really accentuates the tensions of the plot. It is one of the best-looking TV series I have seen in a while.
Posted by Grant at 7:21 AM