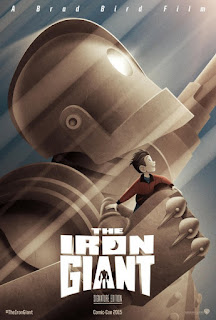 I have always maintained that 1999 was one of the best years ever for American cinema. It was a year that saw the release of The Sixth Sense, Toy Story 2, The Matrix, Fight Club, The Blair Witch Project, American Beauty, The Insider, Office Space, Election, Ride with the Devil, Any Given Sunday, Man on the Moon, Galaxy Quest and a bunch of others. One of the very best films of that year was an animated feature produced by Warner Bros, which was released without much advertising or promotion and failed at the box office: Brad Bird's The Iron Giant.

At the height of the cold war, a boy named Hogarth Hughes stumbles upon a giant alien robot in the forest outside of town. While he initially relishes the chance to make friends with this unique creature, its arrival has already raised the suspicion of the United States Military and the authorities are closing in.

This is one of those rare perfect films: perfect in the sense that it has a clear creative objective and it fulfils that objective without any qualifications or visible flaws. There isn't a bad scene, nor one weak characters. It is entertaining from beginning to end, and hugely effective. I am a pretty easy cryer when watching movies; this film makes me bawl every time. It's an emotional masterpiece.

I often find the best films are actually the most difficult to review, since there are no real quibbles or faults to discuss. Instead there's simply the temptation to write 'go watch it' 150 times and leave it at that. When thinking about The Iron Giant I think there are basically five key ways in which it excels.

First and foremost, there is the story. At its heart this is a film about a boy and his dog: we are introduced to young Hogarth as he fruitlessly begs his mother for a pet. He soon finds one, albeit an extraordinary one: a huge towering alien robot that feeds on metal and hides in the forest. The childhood experience of a first pet is a near-universal one, and by tapping into that Bird gives the audience a hugely personal connection with which to engage with the story. It is also a masterful adaptation of Ted Hughes' 1968 children's novella, taking the elements that Bird needs to create an entertaining three-act narrative but jettisoning any elements that are either surplus to requirements or unsuitable for a feature film.

Secondly there's the setting: 1950s America, deep into the Cold War. Children watch 'duck and cover' film reels in school. Everybody is talking about the Sputnik satellite. It's also a key period for paranoia over UFOs and alien invasions. Putting the Giant's arrival into this context adds a huge amount of drama and tension, while the military's arrival in town to uncover and combat the Giant feeds directly into the film's overall pacifist message: the Giant is a weapon that doesn't want to be a weapon any more.

The design is top-notch, particularly the retro-style Giant who has such a wonderful and immediately iconic appearance. The human characters look great too, drawing on the American Disney-inspired traditions but finding their own distinct aesthetic as well. That design all feeds wonderfully into the animation, which is primarily hand-drawn cel animation but with the Giant rendered in CGI. It makes him stand out wonderfully as something unfamiliar and alien in the American landscape. The Iron Giant was produced in the final years of cel animation among the American studios, and stands as one of the industry's finest achievements.

Finally there are the film's characters. They are richly developed and wonderfully acted by their respective voice artists. They are exaggerated but remain grounded in reality. Hogarth (Eli Marienthal) is an immediately relateable boy, as is his over-burdened single mother (Jennifer Aniston). Local artist and junk dealer Dean (Harry Connick Jr) adds some humour and flair to the cast, but the real star here is the Giant himself voiced by Vin Diesel. It is remarkable how much heart and soul Diesel manages to pour into the character with such a limited range of dialogue. Lines like "I am not a gun" or even simply "Superman" take on enormous resonance and are deeply effective. The giant is an astonishing combination of design, animation and voice acting.

Recently The Iron Giant has been re-released to bluray with a wonderful new high-definition master and an all-new scene depicting "the Giant's dream". It's an excellent scene, and slots into the film incredibly well. It's all the more impressive that the scene was produced more than 15 years after the rest of the movie and looks as if it was always supposed to be there.

This is not simply a great animated film; it is a masterful film regardless of style or media. That it failed in cinemas in 1999 is a travesty. That it is a cult hit and widely acknowledged masterpiece almost two decades later is only to be expected. This film deserves all the praise it gets.
Posted by Grant at 5:26 PM