Star Trek: The Next Generation: Season 5 in review 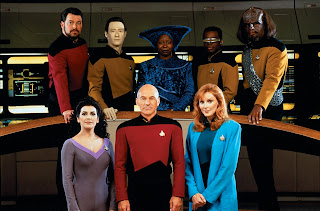 Before this rewatch of Star Trek: The Next Generation's fifth season I remembered it being the best season that the series ever had. Having now come out the other end with the episodes fresh in my mind, I am not entirely certain if that is entirely true. It has many of my favourites, certainly, and it begins and ends on a very strong note, but on this blog's binary "is it good or is it bad" scale I cannot help but notice the season is only 65 per cent compared to Season 4's 73; that is, Season 4 had 19 good episodes and Season 5 only 17.

Then it comes down to actually thinking about the best episodes. For Season 4 the best it got was with the likes of "Family", "The Drumhead" and "Redemption". For Season 5 those highlights include "Darmok" and "The Inner Light", both of which I'd consider to be among the very best episodes of any series of Star Trek. So while there is a slightly larger number of unsatisfying episodes here, the highlights honestly are so much brighter.

This is the first season of Star Trek: The Next Generation without any regular cast changes. Season 1 lost Tasha Yar (Denise Crosby), Season 2 lost Dr Crusher (Gates McFadden) but gained Dr Pulaski (Diana Mulduar). Season 3 swapped doctors back again. Season 4 lost Wesley (a much-missed Wil Wheaton, at least by me anyway). The closest that Season 5 comes to a cast change is the introduction of Ensign Ro Laren (Michelle Forbes), but she only appears in six episodes. She is a great temporary addition to the cast; it's a shame Forbes only makes one appearance in each of the two subsequent seasons.

One huge step forward in Season 5 is the full embracing of The Next Generation's heritage. To celebrate Star Trek's 25th anniversary the series presented a two-part storyline starring Leonard Nimoy as Spock: uniting both generations at last into a single and unified franchise. It's likely not a coincidence that while production of Season 5 was underway Paramount was discussing a second spin-off series with The Next Generation's producers. Of course it was while Season 5 was in production that creator Gene Roddenberry died, so in many ways this is the year in which Star Trek changed forever: it outlasted its creator, and started expanding into a full-blown media empire.

The overall impression of Season 5 itself, however, is a series that is running on all cylinders, is finally comfortable with its own identity and position within the broader Star Trek universe, and regularly producing some genuinely great pieces of television.

To my mind the season's best episodes were:


On the other hand, it was not without its failures. The worst episodes were probably: