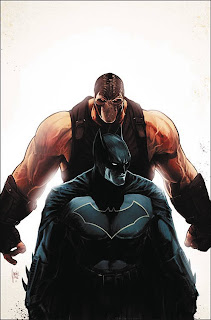 Tom King has dangled one hell of a character hook over his readers. Catwoman, in her first appearance in the Rebirth era DC Universe, was imprisoned for murdering 237 people. We don't know the details, we just know she was in Arkham Asylum because of it, and she fears that sooner or later she may be executed for it. As I said, it's a hell of a hook.

This current Batman story arc, "I Am Suicide", has seen Batman assemble his own personal Suicide Squad to break into Bane's island fortress and retrieve the villainous Psycho Pirate. The team includes Catwoman, Bronze Tiger, Punch and Jewlee, and Arnold Wesker - aka the Ventriloquist. It's an intriguing mixture of characters, particularly Wesker. I am desperately waiting for the other show to drop as to why he's on Batman's team without his diabolical puppet Scarface.

The real question, however, hangs over Catwoman. What did she do? How did it happen? What lengths will she go to in order to avoid returning to prison. This is a great, wonderfully tense issue. Art by Mikel Janin and Hugo Petrus is excellent. Colours by June Chung are rich and evocative. I am enjoying the hell out of this arc. (4/5)

Under the cut: reviews of The Electric Sublime, Superman, and Yakuza Demon Killers.

Margot Breslin continues to investigate a wave of art crime, while recovering from her experience inside the mysterious "electric sublime" with artist Arthur Brut. I am loving the hell out of this series, which is rich in imagination and features superb art and colours. Those last two are key: you cannot really produce a surreal fantasy comic book about art crime without really solid artwork yourself. In this regard The Electric Sublime excels. Fans of old-school Vertigo and new-school Jonathan Hickman should check this out. (5/5)

Superboy and Robin trashed the Batcave with their fighting, so now their fathers have set them up on a test to see if they can ever work together. This issue is a confection, but it's a pleasant one. The plot is slight, but it has a sweet heart to it and a huge amount of amusing banter. It's all set-up for next year's Super Sons monthly, but going by the character interplay here that may be a really entertaining series. One small surprise in this issue is just how heavily it relies on the cast of the recently concluded Robin: Son of Batman. It feels more like an extra issue of that series that the latest issue of Superman. (3/5)

A group of thieves are ambushed by murderous demons inside a Tokyo museum. This issue is tremendously over-written, with unnecessary and florid narration punctuating the action and the dialogue feeling more than a little ripe. While Eli Powell's artwork has a scratchy appeal, the script is relatively flat and uninvolving. Characters are introduced. Banter is traded. People die. It all feels a little too generic and under-cooked to make an impact. (2/5)
Posted by Grant at 9:05 AM