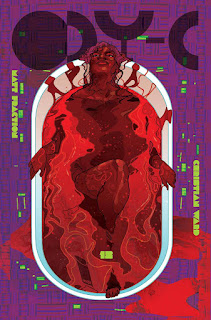 A violent and gory gender-twisted science fiction adaptation of classical myth told in semi-serious and dark limerick form: what else could it be but ODY-C?

I adore this comic. I love how boldly it is written and illustrated. It takes no prisoners. It does not pander to market demand. It's smart, imaginative, challenging and regularly mystifying. The colours are rich and absolutely beautiful to look at. Matt Fraction has done a masterful job here, adapting Agamemnon with intelligence and wit. So effective is the writing and the detail of Christian Ward's art that it took me half the issue to realise there was only one panel per page. It is so well crafted that I almost didn't notice.

This marks the end of the first phase of ODY-C. When it returns we are back with Odyssia's voyage home, and won't be back among Clytaemnestra's family until issue #23. It's a long wait, but it's going to be worth it. (5/5)

Under the cut: reviews of Doctor Who, Lake of Fire, and Saga.

Events pretty much swing back to the beginning in this penultimate issue of Titan's mammoth 15-part storyline. The Squire - a former companion of the War Doctor - has risen from the dead and captured the 11th Doctor, and as the climax is set up she reveals everything: including who framed the Doctor for genocide. It's all wonderfully clever stuff, pulling all the disparate plot elements together and setting things up perfectly for next month's final issue. I'm really loving this comic. Every month across this arc it has presented the best combination of fan-pleasing continuity and smart story ideas. It's set a remarkably high bar for 2017's new volume. (4/5)

With the alien invaders threatening to return a third time, the Templars venture beyond the town walls to challenge them at their lair. The dense panel layouts are great in this comic: they allow for more story and character development than we usually receive, and that makes a world of difference in terms of reader engagement. The characters are all wonderfully developed as well, with Fairbairn's script showing off a wonderful amount of historical research. I have really been enjoying this book - I actually have no idea how many issues it is intended to run for, but with writing and art this book I'm happy for Fairbairn and Smith to take their time. (4/5)

So much of Saga's appeal is seeing surprising plot developments and unexpected character deaths, so I really don't want to discuss the plot too closely. What I will say is that by bringing the main cast of the series together into the one place has really given the comic a much-needed shot in the arm. It's rarely been less than good, but it hasn't really been great too often in the past year or two, and this current arc (three issues in) feels like the book is becoming great again. Fiona Staples' art continues to impress, particularly her ability to mesh together the ridiculously cute with the bluntly violent in the same panel. (4/5)
Posted by Grant at 9:11 AM