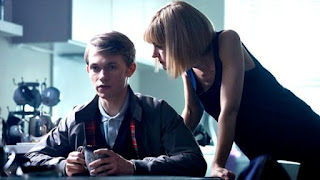 Given its age and enormous cultural impact it continues to surprise me how rarely Doctor Who generates a spin-off series. K9 got a belated Australian children's drama, and Russell T Davies' Torchwood managed to run for four extraordinarily variable seasons. To my mind the best spin-off was The Sarah-Jane Adventures, which ran five years before Elizabeth Sladen's untimely death closed it down. That's pretty much it, save for an abortive K9 pilot in the early 1980s. Three series and a pilot in more than five decades.

Now they are joined by a new series: Class, created by author Patrick Ness and based around a group of sixth-form students in Shoreditch's Coal Hill Academy. It is a high school with a long heritage in Doctor Who, appearing in its first-ever episode "An Unearthly Child" and most recently acting as the workplace of Doctor Who companion Clara Oswald. All of the Doctor's previous visits there have soaked the site in 'artron energy', turning the school into a magnet for aliens and monsters from across space and time.

It is a pretty generic set-up for a series, but with strong characters and inventive scripts it has the potential to develop into something really entertaining. That potential is definitely there, although the first episode completely fails to realise it.

This first episode's largest fault is that it simply isn't very original. It is, for all intents and purposes, a science fiction-themed refit of Buffy the Vampire Slayer. The episode even acknowledges this via dialogue at one point, in something that might suggest a little pop culture savvy but really comes across as trying to get away with a derivative show by openly admitting it. It introduces a bunch of teenagers, gives them all by-the-numbers teenager problems, and then throws a scary alien menace at them. It's hardly an arresting proposition.

The main characters feel fairly underwhelming and mechanical. There is a mixture of ethnicity and an even split by gender. Two of the male characters are gay and developing a relationship. Two other members of the cast struggle with their parents in easily foreseeable fashions. One has a disabled mother. The problem with it is that it all feels so utterly mechanical. It is a list of ideal features for diversity, but without any striking elements or tics to make the characters come alive. The most interesting character is the group's teacher - actually a murderous alien freedom fighter - but even she feels remarkably re-heated and derivative.

The same goes for the episode's alien threat, which feel like a cross between Doctor Who's Vashta Nerada and Pyroviles, with the unconvincing gruff-voiced ranting of - well, of half of the mediocre Doctor Who monsters over the past few decades. They don't even help to generate a very interesting plot, and are dismissed fairly easily by the Doctor when he turns up.

So Peter Capaldi does indeed pop up to save the day, and steal the agency from the series' regulars in the process. It's a remarkably poor bit of writing, effectively solving the narrative with a deus-ex-machina. It's obviously nice to see Capaldi's Twelfth Doctor appear, since he's so wonderful in the role and since we haven't seen him since last Christmas, but he does feel oddly out of place. In truth there's no real season for this series to be spun-off from or related to Doctor Who at all. Like the character development, it just feels rote and uninspired.

Fortunately there is time. There are another seven episodes to go, and many opportunities to develop the characters and find some stronger stories. To Ness' credit, there are some genuinely intriguing plot threads regarding the alien prince Charlie (Greg Austin) and the mysterious cabinet he carries from his now-dead planet. Seeing them play out may help this series a lot. It does need a bit of help. As it stands it is about as generic as a TV science fiction show can get.
Posted by Grant at 8:39 PM