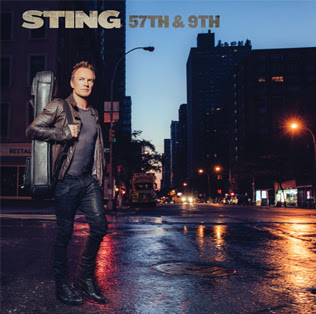 It has been 13 years since Sacred Love, the last fully original pop-rock album from Sting. In the mean-time he's openly struggled with writer's block, produced an album of medieval lute music and a winter-themed collection of old English folk songs. He wrote, staged and briefly co-starred in a Broadway musical, The Last Ship, and even recorded the musical's various songs on his own solo release of the same name.

Despite all of this other activity, it really has been a long time between drinks. That puts a huge amount of pressure on Sting's long-awaited new album 57th & 9th. Fans of Sting previously had to wait about three years between releases, so this kind of delay feels enormous.

I think the amount of change that can take place in 13 years is important, because while Sting has set out to return to his pop-rock roots it feels as if he has not acknowledged just how far his own career has moved on. This album feels largely mechanical: there is visible talent here, but it lacks enthusiasm. There is a strong sense that he reached a point where the album simply felt 'good enough' and stopped at that. Familiarity may improve its standing over time, but based on the first few listens this feels like the weakest album Sting has ever released.

Lead song "I Can't Stop Thinking About You" is upbeat yet utterly generic pop-rock. It feels bluntly cruel to say it, but if this is what Sting's fans were waiting for, it wasn't worth the wait. This hopelessly generic sound feels positively soulless to me - it may be technically proficient and well played, but there's no driving reason for the song to exist. It's a problem peppered throughout the album. The early verses of "50,000" work okay - it's a song about how a whole generation of musicians seemed to start dying in the past year - but the chorus grates.

"Down, Down, Down" has a much more active Sting 'dna' in it. It's by no means a great song, but it does point to his musical talents buried somewhere nearby. Then with the fourth song, "One Fine Day", we feel as if we're back to the generic stuff again. It's easygoing, but hopelessly uninteresting.

"Pretty Young Soldier", "Petrol Head" and "Heading South on the Great North Road" all share a common theme in that they all feel like substandard variations of earlier, much better Sting albums. Of the three, "Petrol Head" is the strongest: a distorted, urgent rock track very reminiscent of the Police's "Demolition Man". It's honestly the first proper indication that the album has a pulse.

"If You Can't Love Me" is the album's first bona-fide great song. A song about an impending break-up between lovers, it has a sort of intensity and emotional drive that the rest of the album has been sorely lacking. A lot of people have been comparing it to "Every Breath You Take", but I think that's hugely inaccurate: that song was a deeply creepy song about a stalker, whereas this one is just an angry, bitter break-up song. It's hurt, angry and mournful. It is not worth buying the entire album for this song, but certainly it's worth tracking this song down on its own.

"Inshallah" is a soulful number about Syrian refugees. It's solid but not overwhelmingly great, but nonetheless a lot better than much of the album has been. The Middle Eastern percussion and instrumentation harks back to "Sacred Love". Finally "The Empty Chair" is a quiet, acoustic closing song. It ends the album on more of a whimper than a bang. Compared to some of the final tracks on earlier albums it's a real disappointment.

The special edition of this album also comes with three bonus tracks. "I Can't Stop Thinking About You" (L.A. version) is a superior version to the official version. It's still a pretty fluffy and inconsequential song, but to its credit it feels a bit more engaging. Likewise "Inshallah" (Berlin sessions version) feels like a slightly stronger version of the official track. The final bonus track is a live recording of the old Police song "Next to You", performed with the Last Bandoleros. It has the sort of energy Sting often manages to draw upon when performing live. After so many leaden tracks on this album I'm not sure if this final track is a relief or a small insult.