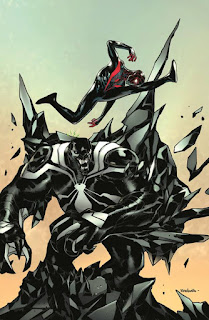 A psychic Inhuman has predicted that Miles Morales will kill Captain America and Miles has subsequently vanished with SHIELD, his friends, and pretty much every superhero in America looking for him. As a result this issue is something like a Marvel Universe Waiting for Godot: everybody is looking for Miles, but he's hiding from his own comic book.

There is a lot of nice character work going on here, throwing combinations of people together and creating a lot of great dialogue as a result. Nico Leon's artwork is crisp and attractive, and wonderfully coloured by Marte Gracia. Unfortunately it is all tied into Civil War II, and that presents a huge hurdle to reader engagement if that reader is not also reading Bendis' much-delayed epic miniseries.

I feel like I'm writing this review of Spider-Man every month. The characters are great. The art is great. The dialogue is particularly marvellous (not pun intended). The book simply does not have any momentum. Every time a storyline begins to pick up speed it falls away and gets replaced by whatever multi-title crossover into which it has been pulled. I'd really love to see Marvel just let Miles be his own character for a while. At the moment he's not getting the opportunity to be the A-list character he deserves to be.

It's also worth noting that this issue's cover has nothing whatsoever to do with the storyline inside. Venom doesn't even show up, and Spider-Man only manages to be in one page.  (2/5)

Under the cut: reviews of Doctor Who: Supremacy of the Cybermen, Joyride, and Southern Cross.

Doctor Who: Supremacy of the Cybermen #5

This year's big crossover event concludes, and like most comic book event miniseries it's all been a bit rubbish. The climax is effectively hand-waved away, which gives it a certain Russell T Davies vibe I suppose, however without the actors to sell it the conclusion is a much more difficult resolution to follow. Ivan Rodriguez's artwork is capable without being particularly distinctive, and he does struggle a little to capture Peter Capaldi's likeness in particular. Perhaps next year Titan might do better restricting the crossover to just two Doctors instead of four, and give the storyline a little more room to actually develop. (2/5)

An eight-dimensional whale offers Uma a wish, and she wishes for the biggest dance party in the universe. It's an unexpected sort of a storyline, but while it does not quite match the quality of earlier issues it bizarrely still works. There feels like a strong sort of Saga vibe with this issue: the whimsical elements feel particularly silly, while the serious moments are much more striking and dark. The alien Kolstak has visibly been harbouring a secret since the series began, but only now are we getting an idea of just how terrible his secret is. (3/5)

It feels like a big step forward in Southern Cross as Hazel and Kyril break free from the rig and head towards the buried artefact that may give answers about the disappearance of the Southern Cross. This second story arc has had a much more mean, gritty feel to it, replacing the horror of the first arc with more blunt violence and claustrophia. It also maintains the film-like atmosphere and tone of the earlier arc, while pushing the story into a fresh and unexpected direction. Lee Loughridge's limited colour palette gives the book a great aesthetic too. (5/5)
Posted by Grant at 9:03 AM