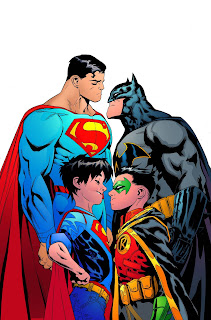 Peter J. Tomasi, Patrick Gleason and Mick Gray did outstanding things during their lengthy Batman & Robin run, really fleshing out and emphasising the father-son relationship between Bruce and Damian Wayne. With the launch of the DC Rebirth initiative, the team came back together to pretty much do the same thing in Superman: develop the relationship between Clark and Jon Kent as Jon's fledgling super-powers begin to take hold.

It was probably a foregone conclusion that at some point Jon Kent and Damian Wayne were going to cross paths, and it happens in this excellent first part of a new storyline. Damian kidnaps Jon after school and takes him back to the Batcave to run tests. It isn't long before he's rumbled by Bruce, and it's only moments after that when a furious Clark arrives.

It's a brilliant comic book, not just because it duplicates the Superman-Batman friendship in child form but because after decades of team-ups it has actually given Batman and Superman something new over which they can bond: fatherhood. The artwork is, as always, fantastic. The dialogue shines. Batcow cameos. It read it from beginning to end with a smile the whole time. (5/5)

Under the cut: reviews of Aquaman, Batman and Green Arrow,

Mera discovers that she may be at the centre of a prophecy that will see her bring Atlantis to ruins, and while looking to tell Arthur discovers the real nature of Atlantis' current enemy. It's a nice progression of the story, temporarily putting the focus onto Mera while Aquaman is unconscious after his fight with the Shaggy Man. I think she is an underrated character, and deserves the exposure. The plotting of this series seems typical of the DC Rebirth approach: small mini-arcs that all add up to a much larger, long-term story. It's exactly the kind of comic book storytelling I like the most. (3/5)

Batman launches his attack on Bane's island fortress, and things do not go well. This is a great issue, combining an action-packed assault by Batman with a mysterious narration that takes quite a while to make its speaker's identity clear. There's one point where I kind of got irritated, but Tom King pleasantly backed away at the last minute. Like Aquaman, this is a series that seems to be pushing smaller storylines that add up to a much broader, long-term arc. Mikel Janin's artwork is great as well - but then isn't it always? (4/5)

On an underwater speed train, Green Arrow, Black Canary and Diggle rush to stop terrorists from disrupting a critical peace conference. This is straight-up, old-fashioned superhero adventure. The script is tight and entertaining, the action well paced, and Juan Ferreyra's artwork is just sublime. There's a splash page towards the end that is jaw-droppingly pretty. After a little stumble over the last few issues, it's great to see Green Arrow back up to speed and presenting hugely entertaining action-adventure stories again. (4/5)
Posted by Grant at 3:37 PM