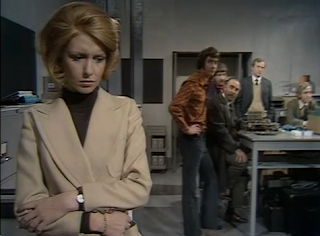 A research project to discover a new recording medium relocates to a large English manor house. When the project leader Peter (Michael Bryant) looks into why a cellar room has not been converted for data storage as requested, he learns that the room is reportedly haunted with multiple people having heard cries and screams while inside. The research project is suspended so that the haunting may be scientifically investigated - an investigation with troubling consequences for the team's programmer Jill (Jane Asher).

I recently reviewed Lost Hearts, a BBC television play broadcast over Christmas, and noted the BBC's odd attitude to Christmas in scheduling ghost stories on Christmas night. It is a choice perhaps stemming from Charles Dickens' A Christmas Carol, a ghost story which pretty much nailed the zeitgeist of the Victorian era's obsession with Christmas. That still does not quite explain why the BBC elected to broadcast The Stone Tape on Christmas night 1972. It has nothing to do with Christmas. It does not tap into an sense of winter of Victoriana. It is also possibly the most dark and effective horror story that the BBC has ever broadcast. I still can't work out if this scheduling decision was folly or genius.

The Stone Tape comes from writer Nigel Kneale, whose Quatermass serials and Nineteen Eighty-Four adaptations without exaggeration single-handedly established BBC Television as a mainstream entertainment source. It is almost not an exaggeration to describe Kneale as one of the most talented television writers of all time. His narratives are impeccably developed, his characters strong and his dialogue crisp and wonderfully phrased. Beneath all of that are his remarkable ideas. Here he takes something very old and traditional - the haunted house story - and overlays a touch of science fiction.

You see it is not a ghost in that cellar: it is a recording of a woman's death, somehow burned into the rocks used to build the foundations in the first place. It is intense and disturbing, and absolutely rather frightening, but it remains a simple recording. This excites Peter, because a new recording medium is precisely what he's been working to develop. It disturbs Jill, because with her emerging sensitivity to what has been recorded the room becomes a fast-growing obsession, and the possibility becomes clear that there is something much older and much more frightening recorded onto the rocks when they were still part of the English landscape thousands of years ago.

One of the hallmarks of Kneale's science fiction works is that his characters behave like intelligent, rational adults. They think things through. They form smart hypotheses. They ask the right questions. The same is true of the characters here. Michael Bryant is great as the self-centred, over-confident Peter, while Jane Asher gives Jill's slide into obsession a proper and sympathetic grounding. Iain Cuthburtson is similarly engaging as estates manager Roy Collinson. The plot gives them all room to develop and change. Each does what they do for intelligent reasons, and those choices culminate in a horrifying and utterly superb climax. There is one moment, somehow generated despite the typically low BBC production values, that remains one of the single-most unsettling moments I have seen on television.

The Stone Tape has a few imperfections, mainly moments of casual sexism and racism that seem to come part and parcel with 1970s British television (check out It Ain't Half Hot, Mum), but even after almost 45 years it packs one hell of a punch. TV has had few writers as talented as Nigel Kneale, and I honestly think The Stone Tape may be his finest piece of work.
Posted by Grant at 5:27 PM