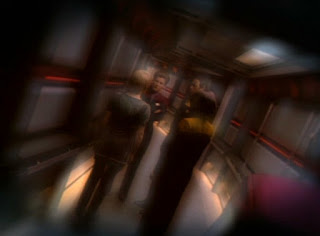 Tuvok (Tim Russ) and Chakotay (Robert Beltran) are recovered from a damaged shuttlecraft. Tuvok is unconscious, but Chakotay appears to be brain-dead. While tracking down the aliens that attacked the shuttle, the Voyager crew start becoming possessed by an unknown entity that is sabotaging their efforts.

"Cathexis" is a bad episode. There's no point beating about the bush on this. It is poorly written and based on a fairly silly premise: that Chakotay's 'neural energy' could be knocked out of his body, allowing him to roam Voyager in an incorporeal state possessing other members of the crew. On the other hand the episode's other half - an actual incorporeal alien possessing the crew one by one - has some genuine merit, but it's written in such a way that the concept is entirely wasted.

There is so much potential here for paranoia and mistrust, as the crew are temporarily possessed one by one by rival incorporeal entities, but that paranoia is never ramped up. Kim Friedman's lax direction does not help. Without sufficient tension or atmosphere, all the episode has left is its plot - which is rather silly - and its characters - who are, to be honest, not very well developed.

While Chakotay lies in his apparent coma, Torres (Roxann Dawson) does her best to heal him using his medicine wheel. Voyager has a very haphazard approach to Chakotay's spiritual beliefs. He is presented as Native American, yet in seven seasons no attempt is made to pin down precisely with what nation he identifies, or to specify his particular beliefs or traditions. Instead he's presented rather lazily as a generic Native American, with a presumably unintended but still unfortunate subtext that 'all first peoples are the same'. Then there is his weird facial tattoo, presented as part of his ethnicity but as far as I'm aware unrelated to any real-world indigenous North American culture.

Of the entire Voyager cast of characters, Chakotay is without doubt the least developed and least effective. Robert Beltran clearly knows it as well: he spent much of his time on Voyager going to Star Trek conventions and criticising his own series, and you can see in his performance how disengaged he is from his own acting process. It's a shame. He is a decent actor and deserved much better than what he received. He is also presented very inconsistently. We have not even finished the first season, and yet already he has shown his medicine tools to Janeway claiming nobody else has seen them before, but now not only Torres but Neelix (Ethan Phillips) has seen and touched them. All up Chakotay is a huge missed opportunity.

Janeway gets a new hobby in this episode: a gothic English holonovel in which she gets to play the role of a governess in a creepy storm-wracked mansion. It's all rather trite, to be honest, although it's nice to see Carolyn Seymour (Survivors) make a small cameo in the scene. There really is something unbearably tedious about most of Star Trek's various holodeck scenarios. Occasionally they manage to get such scenes to work; this is not one of those scenes.

"Cathexis" is a failure, and it's the sixth such failure out of the season's first 12 episode. The quality ratio drops to 50 per cent. As opening seasons go, it's approaching Star Trek: The Next Generation and Babylon 5 for inconsistent roughness.
Posted by Grant at 5:06 PM