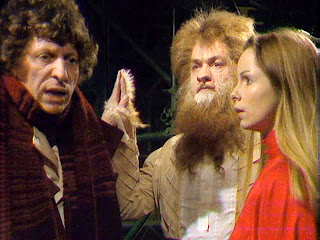 Who50 counts down to the 50th anniversary of Doctor Who by reviewing my favourite episodes and serials over the history of the programme, counting down from #50 to #1. Today, #44: "Warriors' Gate", a 1981 four-part serial written by Stephen Gallagher and directed by Paul Joyce (with Graeme Harper, uncredited).

For me the key appeal of Doctor Who (and, I suspect, the key to its longevity) is the show's versatility. You can tell almost any story you want within the series framework, and occasionally the series has really pushed some boundaries of what you might expect from children's television. "Warriors' Gate", by novelist and script writer Stephen Gallagher, is one of those boundary-pushing stories. It's literate, intertextual, thoughtful, complex and deeply weird.

The TARDIS has spent two full serials lost in a pocket universe known as E-Space. When it collides with a runaway leonine alien in the time-space vortex, the Doctor lands it... nowhere. They are genuinely nowhere. There's a white void outside containing nothing but the TARDIS, a crashed human space cruiser, and a mysterious ruined stone gate. According to the TARDIS console, all of the time-space coordinates are at zero.

What follows is a time travelling story of a cruel empire of aliens - the Tharils - escaping enslavement, history moving in cycles, maniacal space captains, the laws of probability and - in the fourth episode's final moments, the departure from the TARDIS cast of Romana (Lalla Ward) and K9 (John Leeson). It's complex, deeply weird stuff that draws its content from the continuing themes of change and decay that consumed all of Season 18, and draws its style from Jean Cocteau's La Belle et la Bête.

There's one moment in particular that always sticks in my mind. It begins with the Doctor discovering an old ruining feasting chamber, covered in cobwebs and centuries of decay. He absent-mindedly rights a discarded goblet that lies on its side. Episodes later the Doctor is back centuries in the past, arguing violently with the Tharils at their decadent, cruel apex. With a sweep of his hand he knocks the same cup over - just as the deadly Gundan Robots burst through the door to murder the Tharils. It's a wonderfully circular moment possible only in a series such as this, and executed with such subtlety that a lot of viewers never notice it happen the first time.

Paul Joyce really pushed the boundaries of production techniques with this serial. He incorporated the upper gantries and ceiling of Television Centre's main studio as part of his set. He exercised a jaw-dropping amount of colour separation overlay (CSO) to give the world its eerie white atmosphere. He refused to over-explain what was going on, giving the final serial a wonderfully surreal feel that gives up more information and detail the more times the viewer watches it. He famously butted heads with the series' new producer John Nathan-Turner - so much so that some parts of the serial were actually directed by the production unit manager (Graeme Harper). Joyce never directed for Doctor Who again, which is a pity - "Warriors' Gate" is a highly inventive gem. The director was handed one of the series' most inventive and clever scripts ever and refused to dumb it down - I'm so thankful to him (and to writer Stephen Gallagher) for that.