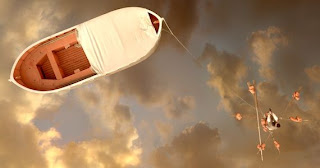 John Ford is the most awarded director in Academy history, with four Oscars. Frank Capra and William Wyler each won three times. William Wyler is also the most nominated director, with 12 nominations in total. On the other hand, pity poor Alfred Hitchcock, Robert Altman, King Vidor and Clarence Brown: all four of them received five nominations over the course of their career, and didn't win once.

Michael Haneke is one of the best directors alive, and yet because he's Austrian this is his very first year as an Oscar nominee (for both directing and screenwriting). I've yet to see Amour but the response to it has been overwhelmingly positive. I suppose the big hurdles facing Haneke are (1) will enough voters have seen his French language drama, and (2) is the Academy prepared to award Best Director to a foreign film for the second year in a row? (Last year's winner was The Artist's Michel Hazanavicius.)

Benh Zeitlin's prize is being nominated. I'm reasonably certain that he has absolutely no chance of winning the Oscar for Beasts of the Southern Wild, a low-budget independent feature with a mostly non-professional cast. The nomination here will count in future years, however, if and when he directs a more prestigious film and the Academy shall reward him for that.

Ang Lee, on the other hand, has a very good chance of winning Best Director for Life of Pi. Let me count the ways: (1) he has by most accounts achieved the apparent impossible and made a gripping film out of a popular "unfilmable" novel, (2) again by most accounts he's the first director to really crack 3D cinema and make a 3D movie that actually works - with so much invested in the technology there's a good chance Hollywood wants to reward that, (3) time and time again he's demonstrated an ability to make exceptional films in pretty much any genre imaginable. I'm not sure there's a more versatile director alive, to be honest.

Steven Spielberg's nomination for Lincoln feels a bit like a courtesy: the world's most commercially successful filmmaker has directed a worthy film and it would seem churlish not to acknowledge that (not that it's stopped the Academy before - I'm pretty sure The Color Purple is the only film to win the DGA Award that didn't even get nominated for the Oscar). The problem is this: even if Lincoln is the best-directed film of the year, does Spielberg need another Oscar? He's won Best Director twice already (Schindler's List and Saving Private Ryan) and this is his seventh nomination in the category.

David O. Russell is the hardest nominee to assess. Silver Linings Playbook is gathering a great deal of acclaim, yet Russell himself has a notorious reputation for being difficult to work with and rather abusive towards his actors. That said, he was nominated for The Fighter and didn't win, so there may be a sense that he's owed an award this year.

My pick: Oh good lord, this one's actually really hard. Zeitlin is right out, and I think Spielberg's going to be passed over as well. If you'd asked me a week ago, I'd have put money on Ben Affleck winning - and he hasn't even been nominated. I'm going to go with my gut and say Ang Lee will win this, but don't be surprised if it's Haneke or Russell.
Posted by Grant at 9:23 AM