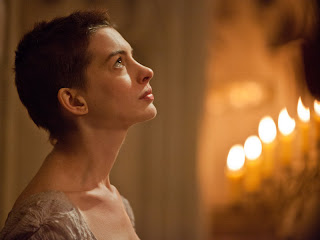 The Best Supporting Actress Academy Award is one that comes with a reputation for ruining the careers of actresses who won it. It would be easy to pretend this was true: did Brenda Fricker, Mercedes Ruehl or Marisa Tomei go anywhere after their wins? (Well, actually yes.)

Instead it's an award that is relatively easier to win for obscure or up-and-coming actresses, since for whatever reason Academy voters are more likely to extend acclaim for a category that seems less prestigious than Best Actress. The five nominees this year are:
Two actresses have won Best Supporting Actress twice: Shelley Winters and Dianne Weist.

This is Amy Adams' fourth Best Supporting Actress nomination in eight years, which brings a lot of "it's due" weight to her chances. She previously received nominations for Junebug, Doubt and The Fighter. She has two problems, however: firstly, her competition is strong, and secondly, The Master wasn't a particularly well-liked film. So far Adams has received seven regional critics' awards for her performance in The Master. And four nominations without a win isn't a record, mind you: Thelma Ritter was nominated six times and never won.

Sally Field has won the Oscar for Best Actress (Norma Rae) in 1979 and was nominated again for Places of the Heart in 1984. She's never been nominated for Best Supporting Actress before and this is her first Oscar nomination in 29 years. She's won five regional critics' awards for her performance in Lincoln. What will help Field a lot is the possibility that Lincoln will make a sweep of the awards, picking up wins in all (or almost all) the categories it's been nominated in.

Anne Hathaway is the easy favourite to win this category. She pretty much nailed it with her tearful performance of "I Dreamed a Dream", that was incredibly affecting and powerful. Add to that she's extremely popular within Hollywood, hosted the Oscars last year and has demonstrated that she's willing to work in small dramas and big studio blockbusters at the same time. Five years ago she picked up a Best Actress nomination for Rachel Getting Married, which was an outstanding performance. She's also won more than 25 regional critics' awards for this: I think this category is the closest thing this year's Oscars have to a sure thing.

Helen Hunt is reportedly brilliant in The Sessions (a lot of people have questioned why her co-star John Hawkes didn't get a Best Actor nomination), but her problem is that I'm not sure enough voters have seen it. It's a small drama about disability and sex surrogacy, and Academy members (many of whom are quite old) don't always reward daring or provocative performances. She's won four awards for this performance, and of course back in 1998 the Academy gave her the Best Actress Oscar for As Good as it Gets.

Finally we've got Jacki Weaver. She blew the Academy away with her performance in Animal Kingdom, and her appearance here for a second role demonstrates that she's very much on their radar. I think she's the best bet outside of Anne Hathaway, and if this was another year I'd almost suggest she had it in the bag. But she doesn't - this is Hathaway's year.