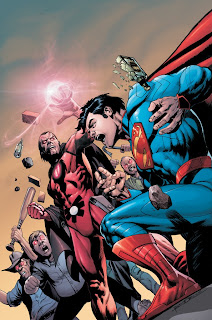 I've been watching the progress of DC's New 52 over the past 18 months, and one of the elements that is striking me as particularly stupid is their insistence on always publishing 52 monthly comics. I get it: it's in the name, there's brand awareness, and it harks back to the classic weekly series 52 (that, ironically, DC publisher Dan Didio loathed). What it means though is that every time DC cancel a poor-selling series, they immediately replace it with something else. Most of those replacements have failure written all over them.

Seriously, what was the logic of replacing the low-selling Men of War with the near-identical G.I. Combat? Is Team 7 and Phantom Stranger seriously going to shift more units that Static Shock or Mr Terrific? More often than not when a new DC book is announced, it's as good as visible from space how few months that book is going to last before poor sales take it off the market.

I really think a smaller DCU, with less editorial interference, would only help the company in the long run. New titles shouldn't be launched because there's a desire to have 52 monthly books, but rather they should be introduced when there's a demand for a particular character or set-up. Talon is a good example, spinning a new hero out of the popular "Court of Owls" storyline in Batman. DC should be doing more of this - allowing the range to develop organically. Randomly launching Sword of Sorcery or Threshold helps no one. It's a wild stab in the dark, and nine times out of ten it's not going to result in a viable title.


As an experiment, let's imagine a DCU where the only books published are the ones selling 25,000 copies or more. Based on December 2012 sales estimates, that immediately cuts the range down from 52 titles to 27. Essentially half of DC's monthly range is, to be blunt, not worth the company publishing. It leave us with:

It's clear that there are some things that aren't selling for DC. Wildstorm spin-offs aren't gaining any traction, whether it's Stormwatch, Team 7 or Grifter. Books that admirably attempt to broaden the DC range into westerns (All-Star Western), horror (I, Vampire), fantasy (Sword of Sorcery) and war (G.I. Combat) simply don't sell. While it may be unadventurous for DC to narrow its focus back to purely superhero titles, I can't help but feel it might strengthen the company as a whole.