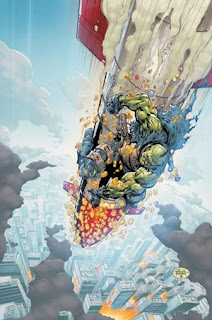 More ridiculous shenanigans from DC Comics this week: they'd only just recently let Karen Berger go, then there was the embarrassing firing, spontaneous re-hiring and then denial they'd ever fired Gail Simone. Now they've allowed one creative team to learn their book has been cancelled by waiting for them to read Previews, and they've let several writers go before their first issues have even hit the shelves. They've also cancelled DC Universe Presents, I Vampire and Paul Cornell's Saucer Country - which rather worryingly leaves DC Vertigo with just three ongoing titles: Fables, Fairest (a Fables spin-off) and The Unwritten.

It seems like every week there's another worrying development within DC, suggesting a company in crisis, desperately running downhill in a mad attempt to sell as many comics as possible but constantly changing its mind on how to do that. It's steamrolling over creative teams, reeking of editorial interference and micro-management, and following mad business decisions like constantly ensuring they have 52 ongoing comics on sale each month simply because they like the number.

I'm all for comic publishers trying new ideas, and launching new concepts, but what is the point of publishing a new title that's visibly going to fail from the outset? This week DC release Threshold in such a fashion as it seems they're deliberately setting it up to fail. My review is under the cut, along with reviews of Batgirl, Batman, Batman and Robin, Captain America, Daredevil, Demon Knights, Frankenstein: Agent of SHADE and Saga. (Note: there was yet another issue of All-New X-Men out this week, but due to a shipping error I failed to get mine. I'll review it when I get it.)

This "Death of the Family" tie-in continues to feel overshadowed by its parent storyline over in Batman. I mentioned when reviewing last issue that it feels unfair on Barbara, who has more invested in a rematch with the Joker than anybody else in the New 52, that her story is being subsumed by Bruce Wayne. This issue does nothing to change my opinion. It does have some unexpected surprises, and great cliffhanger that leads into Batman #17 next month. What's under the lid? (3/5)

Possibly the single-most important thing to take away from this issue is that Batman punches a horse in the face. He also takes down more villains in 20 pages than I think he's ever been seen taking down ever - the Joker has really pissed him off. This issue draws on a lot of things for inspiration: one scene is visibly reminiscent of Batman Begins, and others echo both The Vanishing and Seven. This storyline is building up to a monster conclusion next month, and I'm genuinely concerned about that final cliffhanger and what it may mean for the Bat-team. Seriously, what's under that lid? (5/5)

This feels like the least creative of this week's three "Death of the Family" comics, particularly since if you read it after the other two much of its content is a foregone conclusion. There is some nice character work here for Damian, but all up it feels sort of unnecessary in creative terms while being annoying mandatory in continuity terms. The portrayal of the Joker in this book is significantly darker than in the others, with little humour and a much greater willingness to push the boundaries of taste with the Joker's silly cut-off/strapped-on face. This whole crossover would feel a lot better if it wasn't saddled with that ridiculous plot element. (Thanks for nothing, Tony Daniel.) And holy shit in the name of all that is holy, what's under that lid?! (2/5)

After two really very interesting issues, Captain America comes crashing down with an issue that simply fails to sustain my interest. I'm finding it difficult to pin down exactly what it is that isn't working. It may the plot elements that introduced and then waved away within a page. It may be the silly cliffhanger at the end. It may just be that, unlike Planet Hulk, this "Marvel hero trapped on another planet" narrative simply isn't as inventively thought out, nor as urgently written. Whatever the reason I'm not sure I'm invested enough to keep going with what is a fairly pricy book. (2/5)

What a wonderful palette cleanser. The bulk of this issue is taken up with a Daredevil versus Spider-Man smack-down, because someone asked Spider-Man to take an apparently out-of-control Daredevil down and Spider-Man is now possessed by the mind and personality of Doctor Octopus. (It's all in Amazing Spider-Man #700, which was all over the Internet so don't whine to me if I just spoiled something - seriously, as if Peter Parker isn't going to be back in control of his own body within a year.) The new 'superior' Spider-Man is gut-bustingly funny, and when the fight turns into an old-fashioned team-up against a re-powered Stilt-Man it only gets funnier. Then we get a final page where Mark Waid punches us in the gut for having too much fun. This is a ridiculously enjoyable comic. (5/5)

With Paul Cornell departing as writer last issue, this marks the debut of new writer Robert Venditti. This is a great mini-relaunch, picking up the characters 30 years after their last adventure and reuniting them on an all-new quest. When I heard the book was going to jump forward three decades I was skeptical, but Venditti really pulls it off and Bernard Chang's art supports the script beautifully. We're vampire hunting across Europe now, which makes a nice change from the sorcery and Arthurian myth of the first two story arcs. Sadly the sales for this book are up against the wall, so I'm not sure how long Venditti will have to tell his story. If you're curious to try this book, this is a great jumping-on point. I've been enjoying it quite a lot in the past few months. (4/5)

Goodbye, Frank - I'm going to miss you. For the final issue of Frankenstein, Kindt, Ponticelli and Faucher serve up a one-shot story of monster terrorism and over-the-top superhero action. In the past few issues this book really found its stride, serving up ridiculous monster-slaying excitement even when shackled by the tedious "Rotworld" crossover. I'm glad they allowed this final issue to stand on its own rather than be a part of "Rotworld" - it allows Frankenstein and the gang the send-off they deserve. Here's hoping that SHADE return to the DC Universe sooner rather than later. (4/5)

This book is a very mean cheat, leading its readers deliberately up the wrong path for a few pages before pulling the rug out from underneath them. I suppose it could have been clever: to be honest it just irritated me slightly. The bulk of the book is much better: the Will is still on the case to rescue the child prostitute from some issues back, and this time he's got some additional help to achieve this goal. This is an impressively paced segue from the main action that (aside from that early fake-out) doesn't feel redundant or unnecessary. And that's a great cover by Fiona Staples as well. (4/5)

I almost walked by the first issue of Threshold in my local comic shop, because it turns out DC have elected to title it "Threshold presents THE HUNTED", which isn't remotely what they've spent the last three months advertising. It makes you wonder if DC want their comics to sell any more. The bulk of this issue is taken up with an intriguing spin on The Running Man, with criminals released into the community on an alien planet and then hunted down for cash prizes. I liked it a lot. The backup story begins a Larfleeze serial where the greediest alien in the universe has his entire hoard stolen. It's sort of amusing, but Scott Kolins' art lets it down a bit.

That isn't the actual cover by the way, that's the vastly superior variant cover art by Kenneth Rocafort. Why DC made this cover the limited one, when putting it on the actual cover would have shifted them an extra 5,000 copies, is beyond me. The actual cover is very forgettable and underwhelming.

Let's not kid ourselves: this book is $3.99, and while both the lead story and backup spin off from the Green Lantern line the marketing and title aren't going to do it any favours. This book has eight issues in it, and then it's gone. Enjoy it while it lasts. (3/5)

Pick of the week: Batman is exceptionally good, but Daredevil was easily the most enjoyable book this week.
Posted by Grant at 10:14 PM