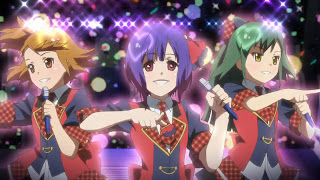 Oh boy - this one's probably going to take a lot of explaining and backstory. If you're already a big fan of Japanese animation, pop music and popular culture you can probably jump past the cut and straight to the review. If you're not, then I'll try and make this as succinct as possible.

AKB48 is a Japanese pop group. It's a highly corporate and artificial invention, even more so than usual girl groups. The idea (by producer Yasushi Akimoto) is simple and to my mind it reveals a diabolical kind of genius. AKB48 is huge. According to Wikipedia, the band currently has 91 members, all young women, all aged between 13 and 25. Maybe 15 or so of them will appear on a CD or music video at any one time. The group has a permanent theatre in Akihabara Tokyo, where fans can go and see daily concerts by some of the 90 members. These concerts are so popular that tickets need to be won by lottery. Regular auditions are held across the country for new members to replace the ones who are getting too old (most of whom segue into independently successful music and film careers). In 2011 the band generated US$200 million in revenue in Japan alone. A string of subsidiary groups have been launched to capitalise on their success: SKE48 in Nagoya, SDN48 (with older members), NMB48 in Osaka and even JKT48 in Jakarta, Indonesia.

At some point in the future, humanity has expanded to a number of offworld colonies. Several of these, in an attempt to control the population and focus on industry, have banned popular entertainment. In defiance of these laws, a rogue super-group of teenage girls have banded together and named themselves AKB0048, after the legendary Japanese girl group of the early 21st century. They fly down to human colonies, buzz a disused quarry and junkyard somewhere, perform a quick pop concert to the rebellious masses of teenagers, and then zoom off to the next planet. Sometimes a local government will send in the military to shoot down AKB0048's spaceship - but that's okay, because it turns out in addition to a pop group they also have a small flotilla of fighter jets to repel aggressors until the concert is complete.

On the colony planet Lancaster, three teenage girls watch an illegal AKB0048 concert and resolve to audition for and join the band. It's an aspirational teen drama, albeit one with space battles, science fiction pop concerts and dystopian future societies.

It's all absolutely bonkers, but what surprises me so much is how genuinely good it is. The script is fairly stereotypical of anime, as are the character designs, but it's beautifully animated and balances traditional cel art with CGI much more effectively than you usually see in this kind of show. It's visually very dynamic, with AKB0048's illegal concert a particular highlight.

It should be a crass, throwaway tie-in, not a genuinely good science fiction animated series. I think the key to the success is who got hired to re-envisage a pop group as a science fiction series: Shogi Kawamori, the legendary anime writer/director who created Super Dimensional Fortress Macross (aka Robotech), The Vision of Escaflone and Earth Maiden Arjuna. He designed elements for other classics like Space Battleship Yamato, Patlabor, Ulysses 31 and Ghost in the Shell. He is a widely acknowledged master of anime, and he's clearly approached AKB0048 with as much respect and creative integrity as he would any other non-pop derived series. With AKB0048 he's actually back on old territory, since Macross (and its English language adaptation Robotech) is easily the most successful science fiction/pop music combination ever conceived.

AKB0048 launched with a 13 episode first season; a second season is currently airing on Japanese television. As far as I'm aware, it's not yet commercially available with English language subtitles - the version I watched was subtitled by fans and uploaded to Youtube. Hopefully a local distributor (are you reading this Madman? Hanabee? Siren Visual?) will pick up the rights sooner rather than later and give this surprising gem the attention it deserves.
Posted by Grant at 9:27 AM