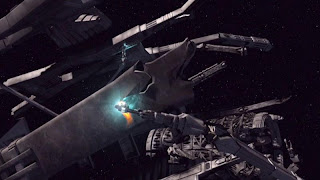 After it's damaging encounter with a Romulan minefield (see the previous episode), the Enterprise is in dire need of repair. A passing Tellarite freighter directs them to an automated repair facility, which initially seems too good to be true. Then Ensign Mayweather is killed in a freak accident, and the miraculous facility no longer seems as benevolent as it first appeared.

"Dead Stop" may be one of the best third season episodes of Blake's 7 that I have ever seen, and of course this is slightly bizarre as it's actually a second season episode of Enterprise. I'm sure there's no real reason for the similarity; the two series are divided by the Atlantic Ocean and 25 years. Still, it feels like it would slot in perfectly: swap Archer for Avon and Mayweather for Cally or Dayna and you'd barely need to change a single line.

It is based on a brilliant concept, and cleverly strips back everything but what's necessary. There are no guest stars to speak of, and only really three or four sets, but a combination of good acting and a strong script means it rattles along at a wonderful pace nonetheless. I loved that it follows on directly from "Minefield", with a massive hole blown open in the Enterprise's hull. In many respects Enterprise has struggled to reflect that it's a prequel: this episode really does feel like the early days of Starfleet, where having a hole blown in the side of your spaceship is an incredibly big deal.

Of course Mayweather (spoilers!) is not dead, but has instead been kidnapped by the facility and plugged into its computer system. It's a wonderful and ghoulish idea, and the scene in which Archer and T'Pol uncover a secret room of comatose aliens is a great one. It's also (hey, trivia fans) the earliest appearance of a Cardassian in Star Trek, chronologically speaking.

I note that this episode is directed by yet another former Star Trek actor, in this case Voyager's Roxann Dawson (B'Elanna Torres). She also plays the voice of the facility's computer. She does a wonderful job with both.

This is my favourite episode of Season 2 so far, and it brings us up to three good episodes out of four - or 75%.
Posted by Grant at 9:53 AM