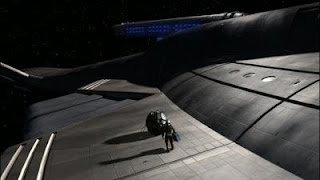 The Enterprise accidentally flies into an orbital field of invisible mines. When one of the mines attaches itself to the ship but doesn't explode, Reed and Archer venture onto the hull of the Enterprise to disarm it - but the clock is ticking, as the minefield's owners have arrived and want the Enterprise out of their system immediately.

While "Carbon Creek" was a strange, frivolous throwaway hour of television, "Minefield" is a tense, dramatic race-against-the-clock thriller. It has a very tight focus on Reed and Archer, and spends a lot of time enriching their characters while they work to defuse and release the mine before it explodes - taking out the Enterprise's engines in the process. It also marks the Enterprise debut, and therefore chronologically speaking the Star Trek debut, of the Romulan Star Empire.

Continuity buffs should be relieved that, despite being set decades before Star Trek's "Balance of Terror", "Minefield" doesn't break any continuity or stretch credulity like last season's Ferengi episode did. T'Pol has heard of the Romulans but her government knows little about them. We never get to meet them face to face - instead we just see their ships and hear the voice of one of their commanders. It's very effective, as it refocuses all of the episode onto Reed and Archer's predicament on the ship's hull.

I adore the character work. Reed is, along with Mayweather, the character that I've had the hardest time engaging with. In Mayweather's case it's simply a problem of not giving the actor or character anything interesting to do. In Reed's case it's been that he's often portrayed as a cold, isolated type who keeps both his crewmates and the audience at arm's length. "Minefield" tackles this self-imposed isolation head on - he begins trying to get out of breakfast with the captain and ends with him literally stapled to the Enterprise's hull with nothing to do but have a conversation with Archer.

It's not a surprise that "Minefield" is so good once you learn that it's the work of Emmy-winning writer John Shiban. His list of genre TV credits is a mile long, including episodes of Enterprise, Supernatural, Legend of the Seeker and Breaking Bad, but it's as a writer and producer on Fox's The X Files that he remains best known. His episode "Memento Mori", which won him the Emmy, is one of that series' most widely acclaimed and effective episodes.

Tightly constructed, tense, well shot and produced and rich in character: there's nothing in this episode I don't adore. My thumbs are way, waaay up, leaving Enterprise Season 3 running at 67% good.
Posted by Grant at 9:05 AM