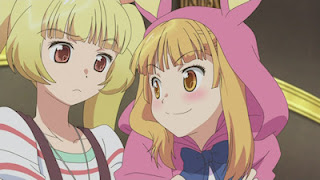 When we last left Nagisa, Yuka and Orine, the three teenagers had successfully passed the first round of auditions to join the rebel idol group AKB0048. We pick the story up with them boarding an interplanetary cruiser liner to take them from Lancastar to the AKB auditions.

They're not the only girls travelling to the auditions. This episode introduces the stress monkey Makoto, the calm and calculated Suzuko, the constantly hungry stowaway Sonata, and Chieri, who made the original pact to join the band with Nagisa, Yuka and Orine when they were younger, and who has now become a cynical, competitive player indeed.

Episode 1 surprised me with its frantic blend of dystopia, teen melodrama, jet fighter dogfights and J-Pop. Episode 2 adds spaceships, giant robots, lightsabers, cyborgs, Pokemon and religious prophecy. My overwhelming reaction is one of delight. My more measured response is 'what the hell am I watching?'
This second episode has a much sweeter, cuter tone than the first: most of the episode is dedicated to the light-hearted interplay between the various lead characters. They mostly fall into stereotype. Chieri is the one who interests me the most: she has an oddly blunt perception of how the AKB auditions will operate: why be friends with the other girls when you're only in competition with them? Why expect something nice to happen from being a pop singer in a commercial group, when they're basically going to exploit you? It lends a nice, slightly sharp edge to an otherwise overly cute half hour.

Then the government comes to arrest any girls attempting to audition for the band, and we're suddenly into an all-out action sequence involving armoured soldiers shooting machine guns at teenage girls. What can I say? Those guys must really hate J-Pop.

There are weird Pokemon-like creatures as well, called Kirora. They're tiny and squeaky and fly around the place. They glow in the presence of true pop stars, which is perhaps the oddest thing I've seen on my television in about a year.

This series runs for 13 episodes, with a second season just starting on Japanese television. I may not review each episode in turn - I guess I'll probably keep going for as long as I feel I have interesting things to say about it.
Posted by Grant at 10:27 PM