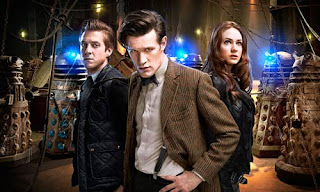 I rarely find the time to watch free-to-air television any more. There's something inherently "20th century" about scheduling a prearranged time and day to watch an episode of the latest sitcom or drama. Generally I buy whole seasons of a series once available on DVD or blu-ray and watch them at my leisure, or I make use of the ABC's wonderful iView service.

As a result, I very often find myself at least a year behind everybody else when it comes to watching TV shows. Dramas I watched for the first time in 2012 included Trauma and Southland, for example, both of which came out a few years ago. I also finally watched some of David Attenborough's more recent works like Frozen Planet and Madagascar. All great stuff, but not from 2012. Under the cut, then, are 10 TV programs - six dramas and four comedies - from 2012 that I not only managed to see but really enjoyed as well. They're not ranked, other than in alphabetical order.

Doctor Who
In a year in which viewers managed to see less than half of Season 7 (the remainder airs from Easter 2013), you'd think it would be a bad year for Doctor Who. Maybe. The thing is that the six episodes we did get were all enjoyable - not a single dud in the bunch - and that's a pretty unparalleled achievement for a series that usually manages to churn out a substandard episode every few weeks. Whether it was a hunt through a Dalek madhouse, or an adventure with Cleopatra on a spaceship full of dinosaurs, or even the Ponds' final hurrah in the TARDIS, each episode felt like a self-contained, strikingly enjoyable epic. Doctor Who now heads into its 50th anniversary year in better shape than it's been in years.

Game of Thrones
The epic adaptation of George R. R. Martin's A Song of Ice and Fire continued with a strong second season. The main concern now is that the ratings hold up long enough for HBO to finish the story - they do have a bit of a reputation for abruptly cancelling their shows, as viewers of Deadwood will sorely remember. Season 3 will only adapt the first half of the third novel, which does make me a little concerned we're looking at either a 10-12 season TV drama, or we really will never see the end of this story. Peter Dinklage remains, of course, my favourite actor in the show. He's astoundingly good.

Girls
I have to admire Lena Dunham, who - only in her mid-20s - is writer, director, producer and star of this excellent 10-part half-hour comedy/drama (not to mention she recently sold her memoir for a $3.5m advance). Girls is a show about four young women who look like real young women, with believable problems and easily recognisable personalities. This series feels like an American independent film, or - rather - a 10-part series of them. I can imagine a lot of viewers finding this series a bit annoying, and that's fine. It's very much a love-it-or-hate-it kind of show: total hipster-bait, but kind of secret mocking those hipsters at the same time.

The Hollow Crown
I think this TV miniseries was a monumental achievement, adapting four of Shakespeare's history plays as a series of made-for-television films. The dialogue remained true to the original plays, but they were shot and presented like Hollywood and with an "all-star cast" that actually justified the hype. Whether it was Ben Wishaw as Richard II, Jeremy Irons as an ageing Henry IV or Tom Hiddleston as Henry V, or even through supporting parts played by Patrick Stewart, David Morrissey, David Suchet, Rory Kinnear, Julie Walters or John Hurt, The Hollow Crown was a wall-to-wall master class in acting. This series was produced by Sam Mendes (American Beauty, Skyfall) and was such a creative success I can only hope the BBC follow it up with another series soon.

Homeland
This series cleverly fools you. It's from the guys who made 24, and its premise screams "sensationalised panicky action": a tortured POW is returned to the USA from Afghanistan, and while the masses welcome him as a hero, one CIA analyst becomes convinced that he's been turned into a secret terrorist. It has a high-powered cast led by Claire Danes (returning to her first TV role since My So-Called Life), Mandy Patinkin (returning to his first TV role since Criminal Minds) and Brit Damian Lewis, who's putting a pretty remarkable American accent. But, as I said, this series cleverly fools you: it's not the show you think it is, and it develops into something else altogether. I've only seen Season 1, but can't wait to see Season 2 and find out how the story develops.

Horrible Histories
I was late to the party as always, but 2012 was the year that I stumbled upon Horrible Histories. For someone who's never seen it, the suggestion that a children's afternoon program might be the best television comedy being broadcast in the world seems vaguely ridiculous - it turns out that it's true. A flawless ensemble cast and a team of exceptional writers have crafted a wonderful Monty Python-inspired sketch comedy series that's entertaining and educational, and stands heads-and-shoulders above the comedy work being made for adults. 2012 saw the series' fourth stunning season air on the BBC - a fifth is already in production.

The Hour
This 1950s-set drama follows the making of a BBC news program during the early days of BBC Television, and managed to be a more evocative period drama than Mad Men and a better news-based drama than HBO's overly smug The Newsroom (and it pains me, as a Sorkin fan, to admit that). A great cast of actors headline this show including Ben Wishaw (of Hollow Crown fame), Romola Garai, Dominic West and Peter Capaldi (whose new season of The Thick of It would almost certainly have made this list had I managed to see it last year). If Mark Gatiss' forthcoming TV movie about the creation of Doctor Who is even half as evocative of BBC history as this show, we're in for a treat.

New Girl
This is the most pleasing new US comedy series in years, even if it does steal half of its plots from Friends. On the one hand it features Zooey Dechanel as the most egregious example yet of the "magical pixie girl" trope, but on the other hand it's a series that regularly and openly admits that if you lived with that girl you'd probably find her kind of annoying fairly quickly. This show combines strong scripts with a very engaging, talented cast - particularly Max Greenfield as Schimidt, who should be supremely irritating but somehow manages to make himself likeable instead. I still don't know how he manages that.

Person of Interest
American networks live on procedurals, whether CSI or NCIS or any other variant. Person of Interest at least manages to find a new angle from which to approach the format. The genius of this series is that it's a secret science fiction drama, one so subtle that the majority of its viewer most likely never notice it. On top of that it's beautifully shot and features strong performances by stars Michael Emerson and Jim Cavaziel. I am hoping that the sci-fi elements will slowly become more prominent - it seems to be heading it that direction, but it's taking things very slowly.

Red Dwarf
To be honest I wrote off Red Dwarf somewhere around its fifth season. I continued to watch it, but it ceased being a favourite like it was in its first two years and I honestly was hoping it would quietly die and stop demeaning once-hilarious characters and situations. The three-part "Back to Earth" season was absolutely dire, so when UK satellite channel Dave announced a six-episode 10th season I was dreading the results. Much to my surprise, Red Dwarf received a second wind: not every episode was great, but the good ones could happily hold their own against the better episodes of Seasons 3 and 4 and once or twice approached the glory days of Seasons 1 and 2. Based on the quality in Season 10, I'm not entirely averse to the idea of a Season 11 some time in 2013.
Posted by Grant at 9:48 AM