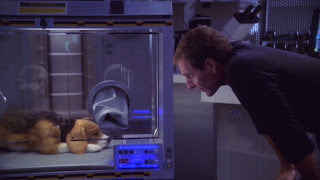 On an away mission, the captain's dog succumbs to an alien infection and is confined to sickbay overnight. Archer decides to keep him company, all the while fending off demands from the planet below that he apologise for his dog urinating on a sacred tree. While trying to sleep in sickbay, Archer must cope with Dr Phlox's strange personal habits as well as sexual feeling towards Subcommander T'Pol.

Be honest: did you manage to read through that synopsis without once going "really? really?". "A Night in Sickbay" is a ridiculous episode that tries desperately to be funny but constantly overshoots and lands in the deeply weird instead. Archer's climactic apology to the Kreetassans involves chanting apologies while half-naked and using a chainsaw to cut up an old tree. One scene involves Phlox scraping slime off his ridiculously long and prehensile tongue. A few minutes are devoted to catching an escaped alien bat with an origami replica taped to a mop.

It's not hard to see what the producers Braga and Berman, who wrote this episode, were trying to achieve. Enterprise has just rounded off two tense, serious dramas and this is intended as some kind of palette cleanser or contrast. The problem is that it misfires on every conceivable level.

Why is Archer suddenly obsessed with T'Pol? It's an element that comes out of the blue and jars quite badly. Why do we need to keep seeing scenes of the cast half-naked, rubbing lotion on each other? What on Earth made the production team think that an interesting episode could be sustained over whether or not a pet dog is sick? Why is a dog on a starship in the first place? Where does he poop? Wouldn't he urinate on things and damage the ship's circuitry? Why oh why are the vaguely irritating Kreetassans back? They weren't that interesting in their first appearance, and nothing indicated a creative need to bring them back.

How did this episode manage to be the highest-rated of Season 2? More people watched this than any other episode of Enterprise that year. I can only assume that after seeing this, audiences ran away from the show in droves.

Why on Earth did Hugo voters see fit to nominate this episode for Best Dramatic Presentation (Short Form)? Were they kidding? Was it an elaborate joke? Were they on drugs? There was a vastly superior episode of science fiction in Enterprise last week for Christ's sake. Thankfully they didn't win, Buffy the Vampire Slayer did, but is "A Night in Sickbay" really good enough to stand alongside the Firefly pilot? Or Angel's "Waiting in the Wings"?

This whole episode just beggars belief. It is not good, and despite it's overall strangeness I can't bring myself to recommend it. That drags the season score down to 60%.
Posted by Grant at 9:17 AM